One of the 10 most important disciples of Confucius.

- quote
Zhong You (Zilu)
Zhong You (仲由) was a native of Pian (卞) in Lu, and only nine years younger than Confucius. His courtesy names were Zilu (子路 - Shiro in Japanese) and Jilu (季路). At their first interview, Confucius asked him what he was fond of, and he replied, "My long sword."

Confucius said, "If to your present ability there were added the results of learning, you would be a very superior man."

"Of what advantage would learning be to me?" asked Zi-lu. "There is a bamboo on the southern hill, which is straight itself without being bent. If you cut it down and use it, you can send it through a rhinoceros's hide: what is the use of learning?"

"Yes", said Confucius; "but if you feather it and point it with steel, will it not penetrate more deeply?"

Zilu bowed twice, and said, "I will reverently receive your instructions."

Confucius later said, "From the time that I got You, bad words no more came to my ears." 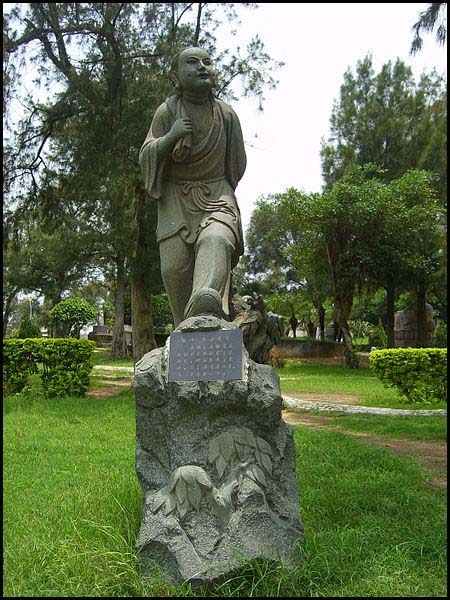 Confucius admired Zilu for his courage, but was concerned that he might lack other virtues (such as good judgement) that would have balanced this courage, potentially turning Zilu's courage into a vice (Analects 5.7; see also 8.2, 17.8, and 17.23). After studying with him, Confucius later praised Zilu as his having exceptional administrative ability and being capable of handling duties of national importance (Analects 5.8). After completing his studies with Confucius, Zilu became chief magistrate of the district of Pu, where his administration commanded the warm commendations of Confucius. He died in Wei. His tablet is now the fourth, to the east, from those of the Assessors.
© More in the WIKIPEDIA !

Confucius and his disciples
According to Sima Qian, Confucius said: "The disciples who received my instructions, and could themselves comprehend them, were seventy-seven individuals. They were all scholars of extraordinary ability." It was traditionally believed that Confucius had three thousand students, but that only seventy-two mastered what he taught.


- quote
Zhòng Yóu (仲由) –
Another famous disciple for his military background, and for being a hot-head. Being only 9 years younger than Confucius, he sometimes quarreled with his teacher, but by and by became more refined, respectful and mature, and Confucius spoke very highly of him as a capable leader. Zhong You was tough under pressure, and well-disciplined.
Sadly he was killed in a rebellion in the state of Wei.
He is often called Zǐ​ Lù​ (子路) too.
- source : confucianism-at-a-glance 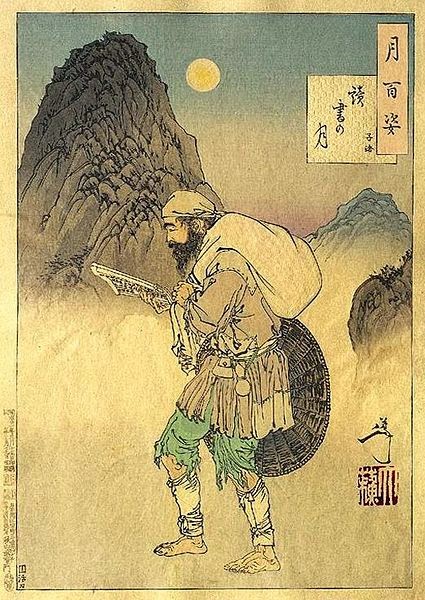 Shiro wakes up
on a night in December
with a white moon . . .

Written in December 1686 貞亨３年.
The cut marker KANA is at the end of line 3.


shiwasu, the last lunar month of the year, now December

Email ThisBlogThis!Share to TwitterShare to FacebookShare to Pinterest
Labels: - - - XYZ - - -