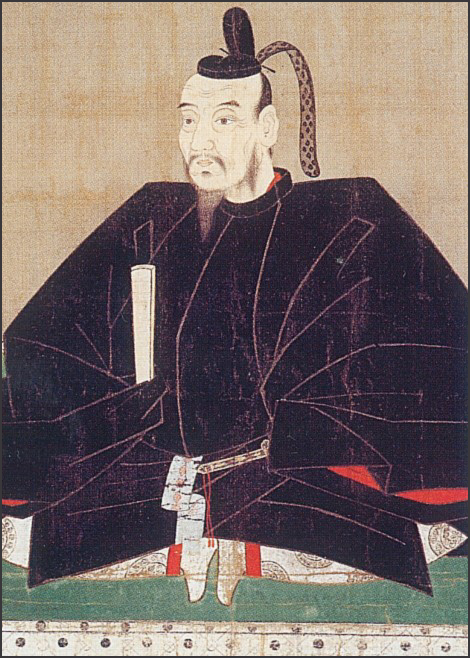 - quote
..... a Sengoku period daimyo in Japan.
He was the 21st chief of the Chōsokabe clan of Tosa Province (present-day Kōchi Prefecture). He was the son and heir of Chōsokabe Kunichika and his mother was a daughter of the Saitō clan of Mino Province.
In the 1562 Battle of Asakura 朝倉
Chosakabe Motochika defeated Motoyama Shigetoki and gained control of Shikoku Island. He then went on to take Aki Castle in the 1569 Siege of Aki.
In 1575,
Motochika was victorious at the Battle of Watarigawa 渡川, gaining control of Tosa Province. Over the ensuing decade, he extended his power to all of Shikoku. However, in 1585, Hashiba (later Toyotomi) Hideyoshi invaded that island with a force of 100,000 men, led by Ukita Hideie, Kobayakawa Takakage, Kikkawa Motonaga, Hashiba Hidenaga, and Hashiba Hidetsugu. Motochika surrendered, and forfeited Awa, Sanuki, and Iyo Provinces; Hideyoshi permitted him to retain Tosa.
Under Hideyoshi,
Motochika and his son Nobuchika participated in the invasion of neighboring Kyūshū, in which Nobuchika died. In 1590, Motochika led a fleet in the Siege of Odawara, and also fought in the Japanese invasions of Korea in 1592.
Motochika died in 1599
at age 61 at his mansion in Fushimi. His successor was Chōsokabe Morichika.
© More in the WIKIPEDIA !

- quote -
Daimyô of the Chosokabe family and eventual vassal to Toyotomi Hideyoshi, Motochika rose to rule Tosa and, for a short time, the whole of Shikoku. The Chosokabe were respected Jito (deputy administrators) of Tosa from the 12th century and entered the 16th Century as vassals of the Ichijô Clan, who were based in western Tosa.
- snip -
Unification of Shikoku
Following his conquest of Tosa, Motochika turned north and prepared for an invasion of Iyo. The lord of that province was Kôno Michinao, a daimyo who had once been driven from his domain by the Utsunomiya clan, returning only with the assistance of the powerful Môri. It was unlikely that Kôno could count on that sort of help again, however-presently the Môri were embroiled in a war with Oda Nobunaga. Nonetheless, Chosokabe's campaign in Iyo did not go off without a hitch. In 1579, a 7,000-man Chosokabe army, commanded by Hisatake Chikanobu, attacked the strongest fortress in Southern Iyo, Okayama castle, held by Doi Kiyoyoshi. During the ensuing siege of Okayama castle, Chikanobu was shot and killed by an arquebus and his army defeated, though the loss proved little more than an unfortunate delay. The next year, Motochika led some 30,000 men into Iyo, and forced Kôno to flee to Bungo province. With little interference from either the Môri or the Ôtomo, Chosokabe was free to press onwards, and in 1582 he stepped up ongoing raids into Awa and defeated the Sogo clan. By 1583, Chosokabe troops had subdued both Awa and Sanuki, making Motochika's dream of ruling all of Shikoku a reality.
Sometime around 1579,
Motochika entered into communication with Nobunaga, whom he fancied an ally. For his part, Nobunaga appears to have humored Motochika, though in private he referred to him as 'a bat on a birdless island' and planned to take Shikoku at some point (in fact naming his son Nobutada commander of the future invasion). This was averted by Nobunaga's death in 1582, and Motochika, whether he was aware of it or not, was given a new lease on life. By now he was something of a national power and became involved in the struggle between Toyotomi Hideyoshi and Tokugawa Ieyasu the following year. He promised the latter support, though made no direct moves to that end. Hideyoshi, to make sure, sent Sengoku Hidehisa (1551-1614) to block any efforts on Motochika's part, though these troops seem to have been roughly treated by the Lord of Shikoku upon arrival on the island. The so-called Komaki Campaign between Hideyoshi and Ieyasu ended in a peace treaty, which bode ill for Chosokabe.
In May 1584 Hideyoshi ordered a full-scale invasion of Shikoku, spear headed by 30,000 troops from the Môri clan and 60,000 more under Hashiba Hidenaga. Evidently, the late Nobunaga's assessment of the Chosokabe was accurate enough, for the invaders found a small army with such equipment as was available in poor condition. After desultory resistance, Motochika expressed a desire to negotiate. Hideyoshi's terms were generous. Motochika would get to keep his head and his hard-earned province of Tosa, an offer Motochika did not feel inclined to refuse.
- snip -
Leadership
In addition to his leadership, Motochika is remembered for his 100-Article Code of the Chosokabe and his struggle to found an economically strong castle town, moving in the course of his career from Oko to Otazaka and on to Urado.
- snip -
The Chosokabe were served by the Kosokabe, Kira (both of whom were led in Motochika's time by his brothers), Yoshida, Kumu, Kagawa (into which Motochika adopted a son, Chikakazu), Yumioka, and others.
- source : wiki.samurai-archives.com-

Chōsokabe Nobuchika 長宗我部信親 Chosokabe Nobuchika
(1565 – January 1, 1587)
was the eldest son of samurai lord Chōsokabe Motochika, and lived during the late Sengoku Period of Japanese history. After the subjugation of Shikoku by Toyotomi Hideyoshi, Nobuchika and his father followed the Toyotomi into Kyushu. Nobuchika was caught in an ambush during the campaign against the Shimazu in Battle of Hetsugigawa 戸次川の戦い and died.
- reference source : -

- quote -
Chosokabe Nobuchika
Nobuchika was Chôsokabe Motochika's eldest and favorite son, and was popular with the Chôsokabe retainers owing to his warm and genial nature. His coming of age ceremony coincided with Motochika's communications with Oda Nobunaga, who provided the 'nobu' in Nobuchika's name, along with a sword and his ceremonial headgear. He was struck down in the retreat from the defeat at Hetsugigawa, on 1/20/1587.
The Shimazu honored Motochika by sending the body of his son to him and allowing him to flee to Shikoku. Nobuchika's death was lamented by the Chôsokabe, and especially Motochika, who had now to chose a successor. His decision to name Morichika as his heir would create deep rifts within the clan that contributed to its ultimate fall. - source : wiki.samurai-archives.com -

. shichinin misaki 七人ミサキ "Misaki of seven people" .
a group of persons who died in an accident or in unnatural circumstances
- Introduction -

- - - - - At 吉良神社 Kira Jinja
During the Azuchi–Momoyama period, after the death of the 長宗我部元親 Chōsokabe Nobuchika, the eldest son of Kira Chikazane's uncle Chōsokabe Motochika, since he opposed Motochika in supporting Chōsokabe Morichika as the successor, he was ordered to commit seppuku. At that time, several vassals also followed suicide (and thus 7 people in total), but afterwards, various strange events started happening at their graves, and the vengeful spirits of Chikazane and the rest were feared as the shichinin misaki. Motochika, who heard of this, held a memorial for them, but there was no effect, and in order to pacify the vengeful spirits, Kizuka Myojin (木塚明神) was deified at the gravesite of 西分村 Nishibun Village, 益井 Masui (now Kōchi). This is the currently existing Kira Shrine.

Also, according to the "Doyooiken Kidan" (土陽陰見奇談) and the 神威怪異奇談 "Shin'i Kaii Kidan," 比江山親興 Hieyama Chikaoki, who also opposed Motochika along with Chikazane, was also made to commit seppuku, and all 6 of his wife and children were also given the death penalty, and it is said that the total of 7 people became
the 比江村七人ミサキ Hie Village shichinin misaki.

- quote -
Chikazane was a son of Kira Chikasada and a nephew of Chosokabe Motochika.
He was married to a cousin, the daughter of Chosokabe Motochika. He showed much promise from an early age but was hot-tempered and combative. In 1586 he protested the demands placed on him as part of the building of Toyotomi Hideyoshi's Great Buddha (which called for lumber from Tosa).
When Chosokabe Nobuchika was killed (1587), Motochika named his 4th son Chosokabe Morichika as his heir. Chikazane protested this decision and demanded that Kagawa Chikazane be chosen instead. He had by this time made enemies with Hisatake Chikanao, a leading Chosokabe retainer, and this most probably worked against him. Motochika responded to his vocal complaints by having him placed under confinement.
Chikazane was then ordered to commit suicide.
- source : wiki.samurai-archives.com -

Kubiarai hachi 首洗い鉢 basin for washing the head
of Chikazane, who committed suicide and his seven retainers followed him.
- See the story above. 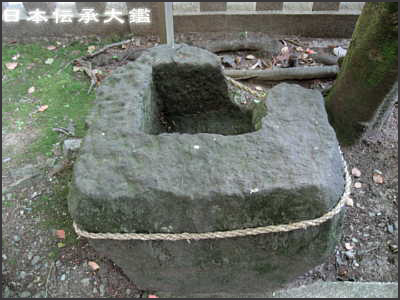 Ukita Hideie 宇喜多秀家
(1573 – December 17, 1655)
was the daimyo of Bizen and Mimasaka provinces (modern Okayama Prefecture), and one of the council of Five Elders appointed by Toyotomi Hideyoshi. Son of Ukita Naoie, he married Gōhime, a daughter of Maeda Toshiie, but Hideyoshi's adopted daughter.
Having fought against Tokugawa Ieyasu in the Battle of Sekigahara he was exiled to the island prison of Hachijōjima, where he died.
- - - More in the WIKIPEDIA !

Hideie and 豪姫 Gohime were a loving couple.
To have something nice for his wife he had a sweet Sake made in Kojima (Kurashiki).
備前児島酒 Bizen Kojima Sake

Soogi, Sogi (Sōgi Jinensai hokku 1519)
Utsunomiya Masatsuna: head of the Utsunomiya house, based in the city of that name in Shimotsuke Province (modernday Tochigi Prefecture) ...

Come summer, pond water will be stagnant and murky, but a fresh infusion of snowmelt from the mountains makes it clear enough to reflect snow of the peaks.

Haiku Before Haiku: From the Renga Masters to Basho
By Steven D. Carter
- source : books.google.co.jp -

When the eldest son of 長宗我部元親 Chōsokabe Nobuchika was killed in the war against the Shimazu clan 島津征伐, his second and third son begun to fight for the right to the family head (which was usually the eldest son). The second son and seven of his followers got killed. These seven could not go to heaven and became a storm, later to be venerated as Seven Misaki.