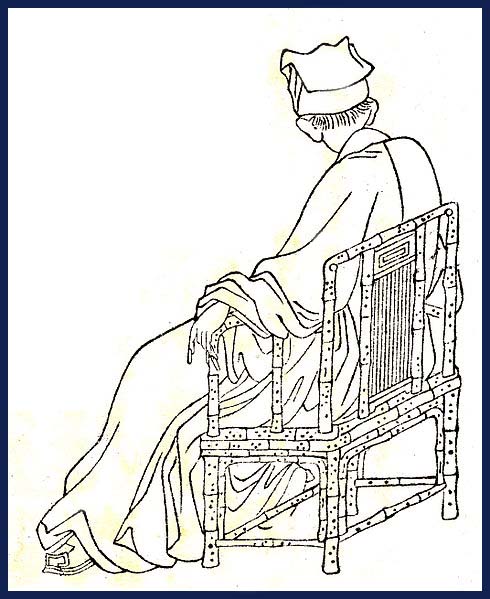 also known by other names such as Wang Youcheng, was a Tang Dynasty Chinese poet, musician, painter, and statesman. He was one of the most famous men of arts and letters of his time. Many of his poems are preserved, and twenty-nine were included in the highly influential 18th century anthology Three Hundred Tang Poems.

Wang Wei is especially known as a poet and painter of nature.

One of Wang Wei's famous poems is "One-hearted" ("Xiang Si"):

When those red beans come in springtime,
Flushing on your southland branches,
Take home an armful, for my sake,
As a symbol of our love.

© More in the WIKIPEDIA !

Peaches in red bloom drink overnight showers.
Willows in green leaf appear beyond misty veil.
My boy is reluctant to sweep the fallen flowers.
Warblers sing to awake the hermit to no avail.

Winter bush warbler!
Long, long ago,
That was in the hedge of Oi.

Background:
*Oi  (王維)  (A.D.701~761) was a poet who composed poetry of landscape and nature, and what is more, he was the originator of Southern painting, or Nan-ga, too.

*Southern painting (Nan-ga) is one of the schools of ancient Chinese landscape painting. Buson held Oi in high esteem both as poet and painter.
*Oi had a villa on the bank of the river 'Mousen', which flows through ancient Randen district, located southeast of Changan, now called Sian. Bush warblers used to sing in the hedge of his villa, which was called ‘Mousen villa.'

*The Haiku was composed last but two on the 25th of December in the lunarcalendar, in 1783. On the day, sixty years old, the Poet, who had been ill in bed, breathed his last. The Haiku is recorded as one of his farewell poems.


Impression:
The Poet Buson hears a bush warbler singing on his deathbed. The time was late winter in the lunar calendar. To be precise, it was just before dawn on the 25th of December. Prof. Ogata says he imagines the singing bush warbler may be the same that sang in the hedge of Oi in ancient times, in the Tang period.

The Poet is aware that death is coming for him, thinking of Oi, whom he has loved and respected as one of his respectable leaders of fine art and literature. Prof. Ogata says the Poet prays the bush warbler may lead him into the realm where the soul of Oi is waiting.

The Haiku and No. 6 in Spring are noteworthy in that in both of them the Poet expresses his strong longing and hearty respect for the two great persons respectively. The one is to Oi and the other to Basho. It is the deep-rooted reverence and admiration for the two great precursors or forerunners that supported his efforts to lead a tough but fruitful life as a painter and poet of a rare kind in the history of Japan.
The fact is really worth remembering on appreciating his art and literature.