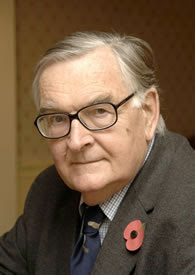 - quote
British diplomat. Also known as Hugh Cortazzi, he is also a distinguished international businessman, academic, author and prominent Japanologist.
He was Ambassador from the United Kingdom to Japan (1980–84),
President of the Asiatic Society of Japan (1982–1983) and
Chairman of the Japan Society of London (1985–95).
.
Sir Hugh has written, edited, translated or contributed to a number of books on the history of Anglo-Japanese relations, and Japanese history or culture. He has also written articles on Japanese themes in English and Japanese publications.
© More in the WIKIPEDIA !

Hugh Cortazzi was posted to British Commonwealth Air Forces in Japan in 1946, and he joined the British Foreign (later diplomatic) service in 1949. After retiring, he worked in the city of London and was an adviser to a number of Japanese companies. He was chairman of the council of the Japan Society from 1985-1995. Since 1983 he has researched and written a number of books about Japanese culture and history and has edited and compiled a series of books on personalities active in Anglo-Japanese relations.

Japan's image abroad is suffering as a result of the apparently growing influence of right-wing extremists in the government. It is in Japan's national interest to discourage revisionists from propagating historical lies that might threaten the democratic processes.
...
Extreme nationalism is a threat to democratic institutions and values everywhere. Recent reports in the British media about the growing influence of right-wing extremists in Japan have caused deep concern among friends of Japan here.

On Oct. 22 it was reported that Sanae Takaichi, the minister for internal affairs, had given an enthusiastic endorsement of a book praising Adolf Hitler. The explanations and denials issued have been contradictory and unconvincing.

If any British minister were to say anything that even by implication supported a criminal who had been instrumental in instituting the Holocaust, there would be a public outcry and the minister concerned would be forced to resign.
...
NHK is supposed to be like the BBC and to be both politically neutral and objective. Under the direction of Katsuto Momii it seems to have been turned into a tool of the Japanese government. As professor Koichi Nakano has apparently said it looks “increasingly like a mirror of CCTV,” China’s state broadcaster.
...
The facts about the activities of the Japanese biological warfare unit 731 in Manchukuo are so horrific that its existence and experiments tend to be buried and, if possible, forgotten. This “amnesia” is at least in part due to American connivance; American investigators were told the results of the “experiments” in return for not pursuing the Japanese perpetrators.
...
I do not mention these facts to stir up trouble or ill feeling. Like other friends of Japan here I believe strongly in reconciliation and support the efforts made by both Japanese and British individuals and groups working for mutual understanding and seeking to ensure that there is no repetition of the atrocities committed in war. Revisionists make these tasks harder.
...
The Japanese media have the reputation abroad of being too close to the Japanese establishment as a result of the “kisha club” system. The beneficiaries of the system deny this, but even if the Japanese media are not “pussy cats,” a study of prewar history suggests that extremist threats can inhibit the free and frank criticism that is necessary to preserve a healthy democracy in Japan.

Japan’s image and prestige abroad is suffering as a result of the apparently growing influence of extremists in the Japanese government. It is very much in Japan’s national interest that the revisionists are discouraged from propagating their historical lies and that Japanese democratic processes are not threatened by extremist anti-democratic individuals or groups.

I am aware that by writing this article Japanese right-wing nationalists will regard me as anti-Japanese. This is not the case. I admire and like Japanese culture and am happy to have many good Japanese friends. One book on which I worked long and hard for a series on “Great Civilizations of the World” is titled “The Japanese Achievement.” In this I attempted to outline Japanese history and its culture. Better a candid friend than an insincere sycophant.
- source : japantimes.co.jp/opinion