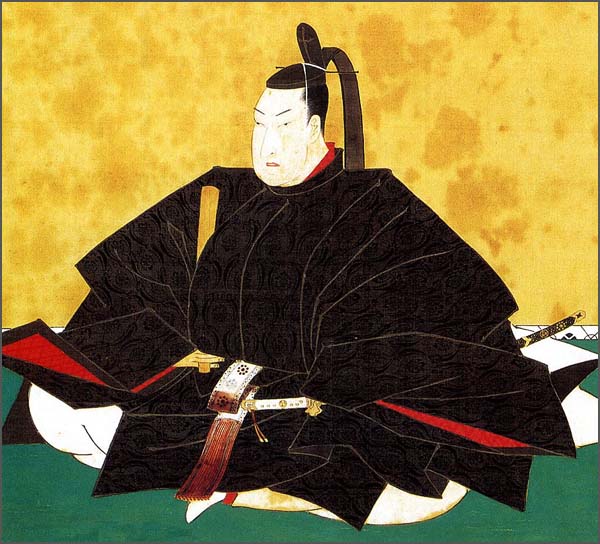 He is known for instituting animal protection laws, particularly for dogs. This earned him the nickname of "the dog shogun."
- snip -
In 1691, Engelbert Kaempfer visited Edo as part of the annual Dutch embassy from Dejima in Nagasaki. He journeyed from Nagasaki to Osaka, to Kyoto, and there to Edo. Kaempfer gives us information on Japan during the early reign of Tokugawa Tsunayoshi. As the Dutch embassy entered Edo in 1692, they asked to have an audience with Shogun Tsunayoshi. While they were waiting for approval, a fire destroyed six hundred houses in Edo, and the audience was postponed. Tsunayoshi and several of the ladies of the court sat behind reed screens, while the Dutch embassy sat in front of them. Tsunayoshi took an interest in Western matters, and apparently asked them to talk and sing with one another for him to see how Westerners behaved. Tsunayoshi later put on a Noh drama for them.
- snip -
Owing to religious fundamentalism, Tsunayoshi sought protection for living beings in the later parts of his rule. In the 1690s and first decade of the 18th century, Tsunayoshi, who was born in the Year of the Dog, thought he should take several measures concerning dogs. A collection of edicts released daily, known as the Edicts on Compassion for Living Things (生類憐みの令 Shōruiawareminorei, Shorui Awaremi no Rei) told the populace, inter alia, to protect dogs, since in Edo there were many stray and diseased dogs walking around the city.
Therefore, he earned the pejorative title Inu-Kubō (犬公方:Inu=Dog, Kubō=formal title of Shogun).
In 1695, there were so many dogs that Edo began to smell horribly.
- snip -
For the latter part of Tsunayoshi's reign, he was advised by Yanagisawa Yoshiyasu. It was a golden era of classic Japanese art, known as the Genroku era.
...
In 1695, there were so many dogs that Edo began to smell horribly.
An apprentice was even executed because he wounded a dog. Finally, the trouble was taken to a distance, as over 50,000 dogs were deported to kennels in the suburbs of the city where they would be housed.
They were apparently fed rice and fish which were at the expense of the taxpaying citizens of Edo.
© More in the WIKIPEDIA !


. Nerima daikon 練馬大根 radish from Nerima .
- - - has been introduced by Tokugawa Tsunayoshi, 5th shogun, to help feed the growing population of Edo.


. The Temple Bell at Asakusa, Senso-Ji .
- - - was cast at the orders of the shogun Tsunayoshi.


. Nezu Jinja 根津神社 Nezu Shrine .
The shrine pavilions we see today were constructed under the orders of Tsunayoshi Tokugawa (1646-1709), the fifth Shogun, in 1706.


. Yuuten, Yūten 祐天 Yuten Shami .
Yuten came to be patronized by Keisho-in, the mother of the fifth Tokugawa shogun Tsunayoshi, who is said to have called on him in his hermit's hut on the outskirts of Edo.


- - - - - 生類憐みの令 shōrui awaremi no rei
This law encompasses all living things, humans at first.
Tsunayoshi cared about the people, he was the first to promote Terakoya schools. When the first foreigners came to Japan in the Meiji period, they were surprized at the high level of literacy in this "backward" country.
He also abolished the law of "kirisute gomen", where samurai could kill normal people without any problem.
He also introduced the idea of being gratetful to the ancestors, installing family graves for the first time, gosenzo daidai 御先祖代々. mostly at temple graveyards.
Until then, individuals had individual graves.


The Dog Shogun:
The Personality and Policies of Tokugawa Tsunayoshi
Author: Beatrice Bodart-Bailey 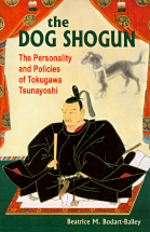 Tsunayoshi (1646–1709), the fifth Tokugawa shogun, is one of the most notorious figures in Japanese history. Viewed by many as a tyrant, his policies were deemed eccentric, extreme, and unorthodox. His Laws of Compassion, which made the maltreatment of dogs an offense punishable by death, earned him the nickname Dog Shogun, by which he is still popularly known today. However, Tsunayoshi’s rule coincides with the famed Genroku era, a period of unprecedented cultural growth and prosperity that Japan would not experience again until the mid-twentieth century. It was under Tsunayoshi that for the first time in Japanese history considerable numbers of ordinary townspeople were in a financial position to acquire an education and enjoy many of the amusements previously reserved for the ruling elite.

Based on a masterful re-examination of primary sources, this exciting new work by a senior scholar of the Tokugawa period maintains that Tsunayoshi’s notoriety stems largely from the work of samurai historians and officials who saw their privileges challenged by a ruler sympathetic to commoners. Beatrice Bodart-Bailey’s insightful analysis of Tsunayoshi’s background sheds new light on his personality and the policies associated with his shogunate. Tsunayoshi was the fourth son of Tokugawa Iemitsu (1604–1651) and left largely in the care of his mother, the daughter of a greengrocer. Under her influence, Bodart-Bailey argues, the future ruler rebelled against the values of his class. As evidence she cites the fact that, as shogun, Tsunayoshi not only decreed the registration of dogs, which were kept in large numbers by samurai and posed a threat to the populace, but also the registration of pregnant women and young children to prevent infanticide. He decreed, moreover, that officials take on the onerous tasks of finding homes for abandoned children and caring for sick travelers.

In the eyes of his detractors, Tsunayoshi’s interest in Confucian and Buddhist studies and his other intellectual pursuits were merely distractions for a dilettante. Bodart-Bailey counters that view by pointing out that one of Japan’s most important political philosophers, Ogyû Sorai, learned his craft under the fifth shogun. Sorai not only praised Tsunayoshi’s government, but his writings constitute the theoretical framework for many of the ruler’s controversial policies. Another salutary aspect of Tsunayoshi’s leadership that Bodart-Bailey brings to light is his role in preventing the famines and riots that would have undoubtedly taken place following the worst earthquake and tsunami as well as the most violent eruption of Mount Fuji in history—all of which occurred during the final years of Tsunayoshi's shogunate.

The Dog Shogun is a thoroughly revisionist work of Japanese political history that touches on many social, intellectual, and economic developments as well. As such it promises to become a standard text on late-seventeenth and early-eighteenth-century Japan.
- source : www.uhpress.hawaii.edu/ - 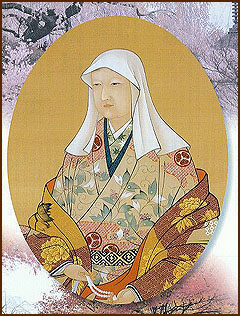 - quote -
Keisho-in - Biography (1627-1705).
The birth mother of the fifth shogun Tsunayoshi Tokugawa. The second daughter of Nizaemon, a green grocer of Horikawa, Kyoto.
Keisho-in entered into service at the inner palace as the adopted daughter of Munemasa Honjo, the Keishi (an officer responsible for running the household) of Nijo Kampaku (Imperial Regent). She was chosen by Kasuganotsubone (the nurse of the shogun Iemitsu), became the concubine of the third shogun Iemitsu, and gave birth to Tsunayoshi. She was called Otamanokata (O-Tama no Kata), became a nun after the death of Iemitsu, and called herself Keisho-in. She rose to Juichii, the highest position for women, and became the power behind Tsunayoshi’s policies. She was also very religious and contributed to building Gokoku-Ji Temple and restoring many temples and shrines.
- snip -
When Otamanokata was a small girl, a priest was said to have predicted that she would rise to greatness.
Just as in the prediction, from being a daughter of a green grocer, Keisho-in rose to the highest possible position a woman could attain. It is a widely accepted theory that her name is the pronoun of Tamanokoshi (Japanese expression for marrying into money) because of her name and how she advanced in the world. In 1680, when Tsunayoshi assumed the role of shogun, she moved into Sannomaru in Edo Castle and intervened in politics.
It is generally believed that the famous law against the harming of animals was drawn up by Keisho-in pressuring Tsunayoshi following the suggestion made by her favorite high priest, Takamitsu. The Matsu no Roka Jiken (the incidence in the Matsu hallway) caused by Asano Takuminokami Naganori at Edo Castle happened during a visit by the Imperial envoy to announce Keisho-in’s new position as Juichii. In Zojo Temple in Shibakoen, where Keisho-in is buried, there are tombs of six shoguns, including the second shogun, Hidetada, and the sixth shogun, Ienobu, as well as the wives and concubines of each shogun.
The Inukimon Gate of the Tokugawa tomb is registered as the City’s tangible cultural property and was originally in front of Ienobu’s tomb. It is a Chinese-style bronze gate decorated with castings of ascending and descending dragons on either side of the gate. The 10 hollyhock crests on the door were added after World War II.
- source : lib.city.minato.tokyo.jp/yukari -


. Yanagimori Jinja 柳森神社 Yanagimori Shrine .
The shrine was built in the late 17th century by a woman named Keisho-in 桂昌院, the daughter of a lowly greengrocer. As a teenager she was 'scouted' by representatives of Edo castle to join the O-oku -- the harem of women who serviced the Shogun.

This temple was founded in 1691 by 覚彦浄厳律師 Kakugen Jogon (1639 - 1702), who was a protegee of the influential Shogunate advisor, 柳沢吉保 Yanagizawa Yoshiyasu.
Reiun-Ji was built on request of the 5th Shogun, 徳川綱吉 Tokugawa Tsunayoshi, as 永代祈願所 a temple to pray for the Tokugawa shogunate. It was located in the North-East direction of Edo castle, a direction of the kimon 鬼門 to "keep away the Demons".
.
Tsunayoshi painted 不動明王 Fudo Myo-O and Daigensui 大元帥明王 Taigen (Atavaka) for the temple, but the Daigensui painting together with other important treasures, was lost in the fires of war.
.
https://gokurakuparadies.blogspot.jp/2017/01/gofunai-temples-28-and-29.html
.