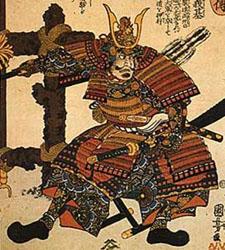 - quote
... one of the leading daimyo (feudal lords) in the Sengoku period Japan. Based in Suruga Province, he was one of the three daimyo that dominated the Tōkaidō region. He was one of the dominant daimyo in Japan for a time, until his death in 1560.
- snip -
As he was not the eldest son, he was ineligible to inherit the family headship directly from his father. As a result, the young boy was sent to a temple where his name was changed to Baigaku Shōhō (梅岳承芳) or Sengaku Shōhō (栴岳承芳). Unrest broke out when his older brother Ujiteru died suddenly in 1536. His elder half-brother, Genkō Etan (玄広恵探, tried to seize the heirship but the clan split into two factions. Yoshimoto's faction demanded that since Yoshimoto's mother was the consort of Ujichika, he was the rightful heir. Genkō Etan's faction demanded that since he was older, he was the rightful heir. Genkō Etan's mother was a concubine and a member of the Kushima family, but they were defeated and killed in the Hanagura Disturbance (花倉の乱 Hanagura-no-ran). Baigaku Shōhō changed his name to Yoshimoto at this point and succeeded the clan.

After Yoshimoto succeeded to family headship,
he married the sister of Takeda Shingen of Kai. This allowed him to cement an alliance with the Takeda. Soon after, Yoshimoto fought against the Hōjō of Sagami. Starting in 1542, Yoshimoto began his advance into Mikawa Province, in an effort to fight the growing influence of Oda Nobuhide in that region. In campaigns over the course of the ensuing decades, Yoshimoto wrested control of a wide area including Suruga, Totomi, and Mikawa provinces.
In 1552,
Shingen's son, Takeda Yoshinobu, married Yoshimoto's daughter. Yoshimoto and the Hōjō clan reached a peace agreement in 1554 with the marriage of Yoshimoto's son Ujizane to the daughter of Hōjō Ujitsuna. In 1558, Yoshimoto left the clan's political affairs in Ujizane's hands, in order to focus on dealing with the advance westward into Mikawa.

Battle of Okehazama and death 桶狭間
In the summer of 1560, after forming a three-way alliance with the Takeda and the Hōjō, Yoshimoto headed out to the capital with Tokugawa Ieyasu (then known as Matsudaira Motoyasu) of Mikawa in the vanguard.[5] Despite having a strong force of 25,000, Yoshimoto deliberately announced that he had 40,000 troops. While this statement put fear in many factions, Oda Nobunaga of Owari Province saw through it. (Some historical sources support the claim of 40,000.)

With many victories, Yoshimoto's army was letting its guard down, celebrating with song and sake. A surprise attack by the Oda army of 3,000 following a downpour left Yoshimoto's army in complete disorder. Two Oda samurai (Mōri Shinsuke and Hattori Koheita) ambushed the Imagawa army and killed Yoshimoto, in the village of Dengakuhazama.

Imagawa Ujizane succeeded to family headship after Yoshimoto's death, but the Imagawa clan fell from power. Ujizane was later summoned by Tokugawa Ieyasu and became a kōke in the administration of the Tokugawa clan.
Yoshimoto's niece was Lady Tsukiyama, the wife of Tokugawa Ieyasu.

Yoshimoto has several graves; his body itself is buried at Daisei-ji, a temple in the city of Toyokawa in modern Aichi Prefecture.
© More in the WIKIPEDIA ! 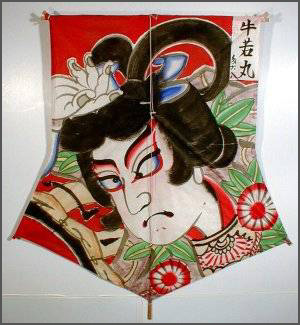 This dates back to the local regent Imagawa Yoshimoto, who flew this kite over his Suruga castle. 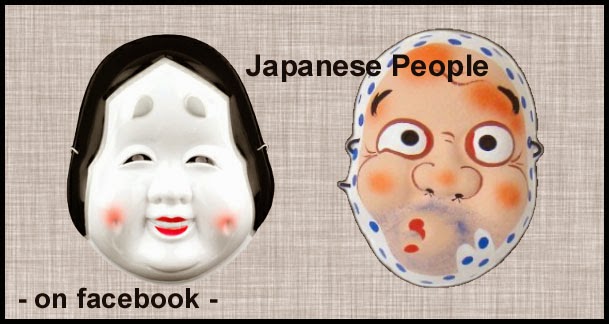 Email ThisBlogThis!Share to TwitterShare to FacebookShare to Pinterest
Labels: - - - I I I - - -