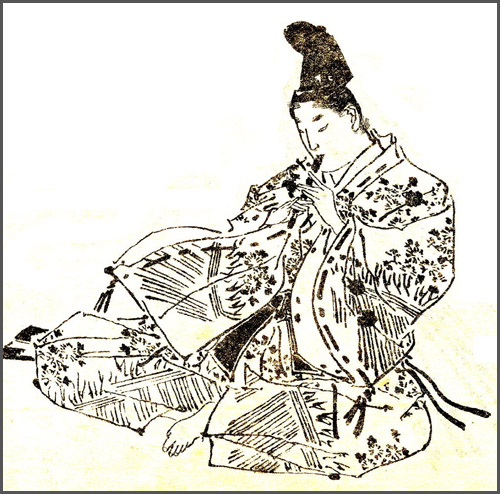 - quote -
a samurai famous for his early death in single combat. At the Battle of Ichi-no-Tani,
Atsumori engaged Kumagai Naozane, an ally of the Minamoto, and was killed. Kumagai had a son the same age as Atsumori. Kumagai's great remorse as told in the tale, coupled with his taking of priestly vows, caused this otherwise unremarkable event to become well known for its tragedy.
- - - The Death of Atsumori as told in the Tales of the Heike
- - - More in the WIKIPEDIA !

temple Sumadera -
I listen to the flute nobody plays
in the darkness under the trees
Tr. Gabi Greve 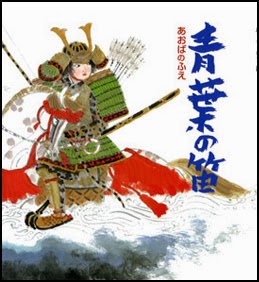 In memory of Taira no Atsumori 平敦盛 and his flute now kept at the temple.
Samurai had to learn all kinds of aristocratic things to be able to please their masters.
Atsumori was famous for his flute playing,, aoba no fue 青葉の笛.

Paul Muldoon, Basho and the Temple Sumadera
... In the real war almost two hundred years after The Tale of Genji, the war epically recorded in The Tale of the Heike, the young Taira general Atsumori was killed by a Minamoto warrior named Noazane, near Suma. Noazane, father of a warrior son the same age as his victim, then discovered on Atsumori’s body a flute, and, reflecting on the insanity of a world in which such killing takes place, he became a Buddhist monk to pray for Atsumori’s spirit. That “Green-Leaf Flute” remains a treasure of Suma Temple to this day.
(The temple was founded in 786, some 400 years before the war and 900 years before Bashô’s visit.)
Bashô plays with the tradition of sadness, isolation, death, and giving up the world at Suma, making the sound of the unplayed flute a metaphor for Zen koans (on silent flutes, clapping, and so on) that lightly dissolves into the pleasant shade of a tree under summer’s sun in this desolate place. But note how that shade suggests again the “Green-Leaf Flute”—and the death of Atsumori. Light as the last line of Bashô’s poem may seem on first reading, it grows deeper with the next. ...
by William J. Higginson

- More information about this haiku
. Atsumori and the Flute . 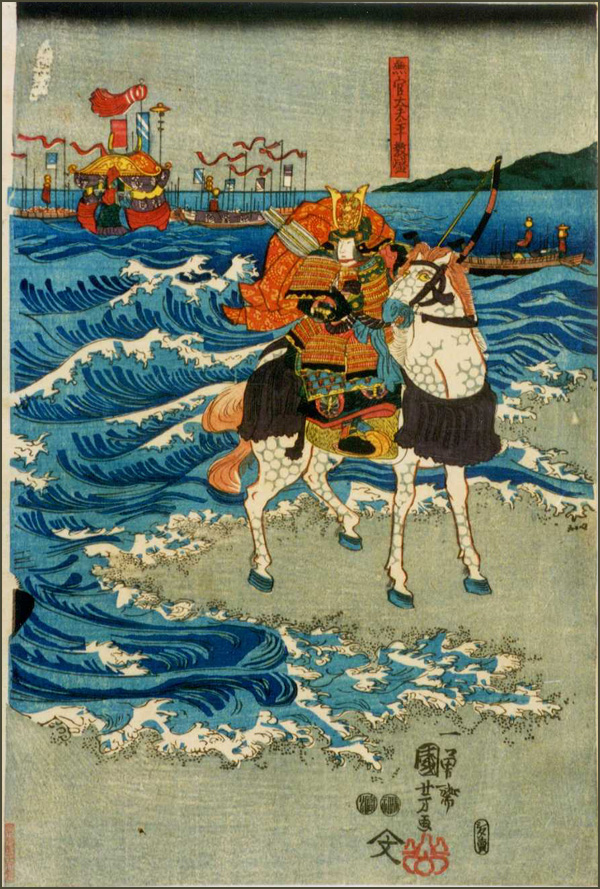 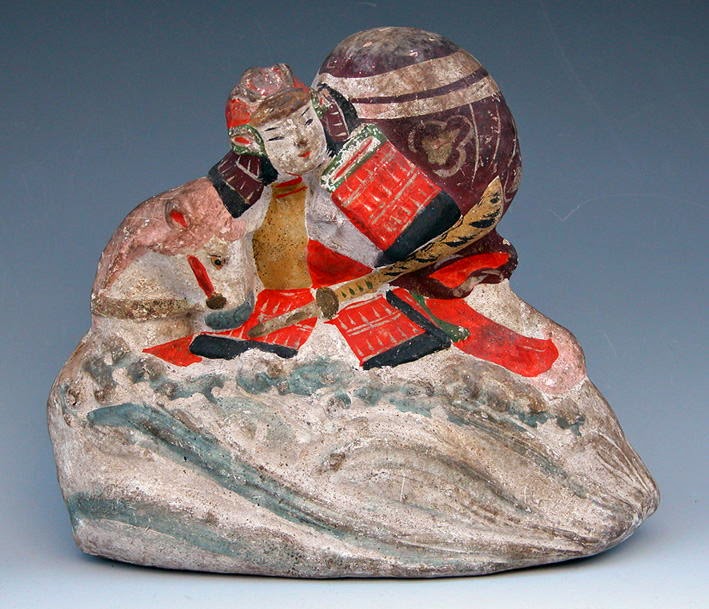 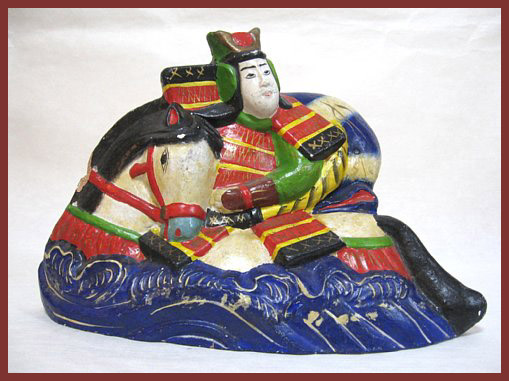 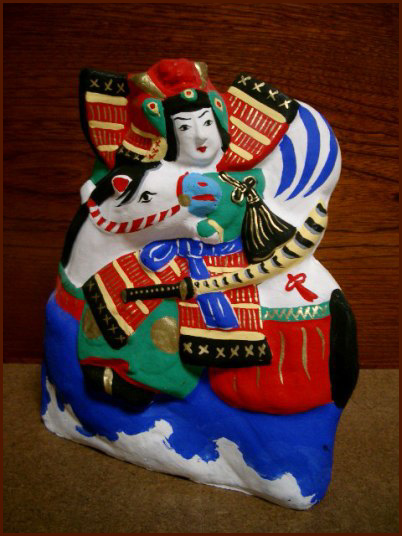 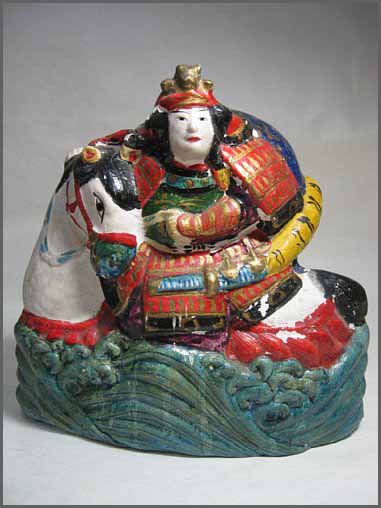 tsue 杖 walking staff
At the Shrine 生田神社 Ikuta Jinja in Kobe Atsumori planted his walking staff into the ground and it grew into a bamboo.


- quote -
Ikuta Atsumori (生田敦盛), sometimes known simply as Ikuta,
is one of many Noh plays derived from the story of Taira no Atsumori, a young Taira clan samurai who was killed in the 1184 battle of Ichi-no-Tani. Taking place largely at Ikuta Shrine, near the scene of the battle, it centers on Atsumori's fictional son, who seeks to meet his father's ghost. 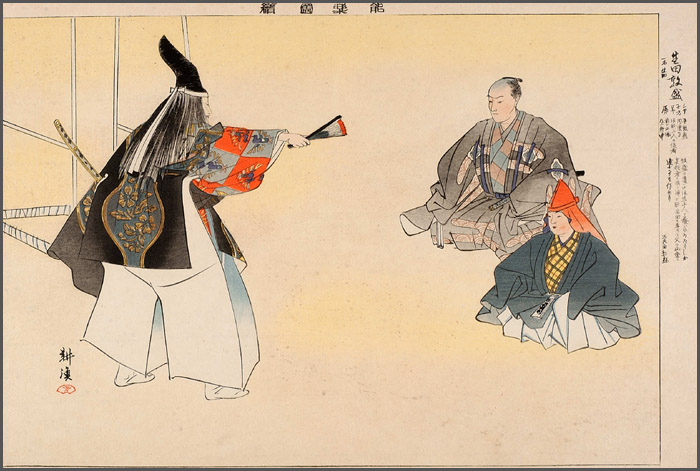 - - - Plot summary
A monk opens the play, introducing himself as a disciple of famous priest Hōnen Shōnin, and explaining how Hōnen once found a baby boy in a box at the Kamo Shrine in Kyoto. The monk says that Hōnen raised the boy, and, that many years later, a young woman came forth revealing herself to be the boy's mother, and explaining that his father was Taira no Atsumori. As the boy now longed to see his father's face, Hōnen suggested that he should go to Kamo and pray there for a week.
The monk concludes his introduction by explaining that this is the last day of that week, and that he has come with the boy to Kamo once again, to pray. The boy then tells the monk that he had a dream while praying, in which a voice told him to go to Ikuta Shrine in order to see his father.
Traveling to Ikuta, the pair come upon a small hut, where they decide to ask to spend the night. The man in the hut explains that he is the ghost of Atsumori. Through the intervention of the Kamo kami, Atsumori explains, he has been granted by Yama, the lord of death, a brief opportunity to appear here in the mortal world, to meet his son. He regales his son with the tale of the battle of Ichi-no-tani, in which he was killed. A messenger of Yama then appears, and takes Atsumori with him, back to the realm of the shura, the hell of constant battle.
- - - Taira no Atsumori
Atsumori is a complex character. He is a great warrior from the Taira family but he also shows a sensitive side with his son. His philosophy on life also seems to contrast during the story. Before the meeting of father and son, Atsumori recites the five attributes of "beauty, perception, knowledge, motion, consciousness". He talks about how the body is weak and it is the soul that guards it from corruption. Yet, when he meets his son, he suddenly becomes concerned about the ratty garments he wears. The idea being that someone who comes from the Taira line should have a better presentation. When talking to his son, he has great pride in telling the story of the Taira family at its peak. As soon as he speaks of the downfall of the great Taira family, he is called back to Hell and just like the Taira family, he fades away.
- - - More in the WIKIPEDIA !