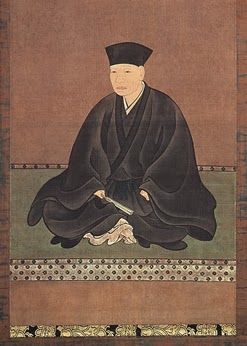 the historical figure with the most profound influence on chanoyu, the Japanese "Way of Tea", particularly the tradition of wabi-cha. Rikyū is known by many names; for convenience this article will refer to him as Rikyū throughout.

There are three iemoto (sōke), or "head houses" of the Japanese Way of Tea, that are directly descended from Rikyū:
the Omotesenke, Urasenke, and Mushakōjisenke,
all three of which are dedicated to passing forward the teachings of their mutual family founder, Rikyū.
© More in the WIKIPEDIA !


If you have one pot
And can make your tea in it
That will do quite well.
How much does he lack himself
Who must have a lot of things?

When you hear the splash
Of the water drops that fall
Into the stone bowl
You will feel that all the dust
Of your mind is washed away. 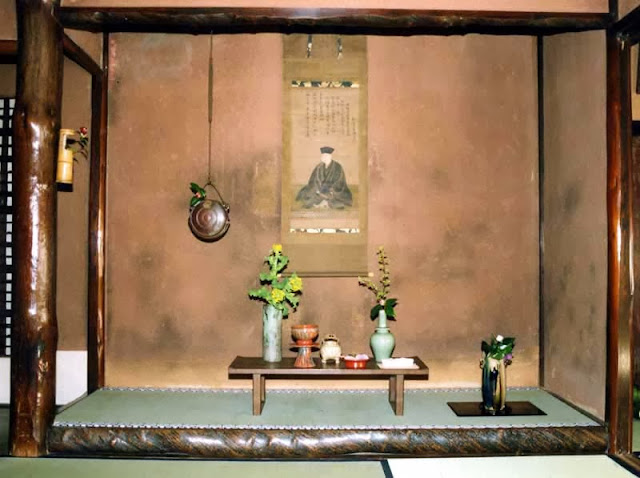 - - - Look at a tea ceremony on his memorial day :
source : www.urasenke.or.jp/textm


we drink
green tea
with ceremony


Sen Rikyu film--
a passing silhouette goes
with the subtitles

We watched a marvelous Film at the movie theatre hall. The movie was about a tea Master called Rikyu and his way of tea preparation, his life with his pupil(s) and his philosophies concerning "The way Of tea". If I can remember well, he attached "Tea" with simplicity and modesty until his death. Tea ceremony, we were told,is a ritual conducted even now.


Sen no Rikyu 千 利休, another famous tea master at the times of Shokado, used to serve his meals in a box in the form of a half-moon (hangetsu 半月). 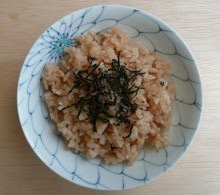 Rikyuu meshi 利休めし rice cooked "a la Rikyu"
Rice is cooked with hoojicha tea, then dashi broth is added. Some green stems of rape (na no hana) are added as topping.
This is a typical dish of spring. 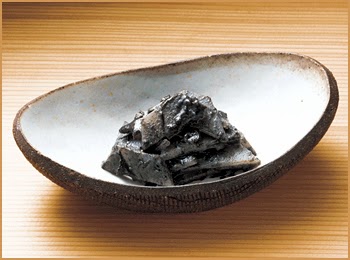 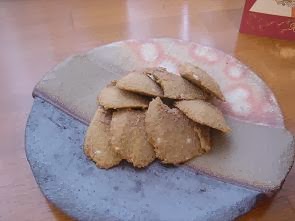 quote
The Nature of Rikyu Grey
..... If one is going to name a certain sensation, formulate an outline of its features, trace its history or search for the origin of that sensation, it must inspire a profound sympathy yet awake a certain critical awareness. For me, such a sensation is "Rikyu grey." The sensation of Rikyu grey represents an aesthetic of an ambivalent or multiple meaning. My interest in it began seventeen years ago when, with a number of friends, I had started the Metabolism movement and developed a strong dissatisfaction with functional architecture.
Function as a criterion in architecture achieved many things, but it also resulted in the articulation and concretization of space.
In the process of providing rationally and clearly articulated spaces, the virtues of nebulous and undifferentiated space that naturally exist between demarcated areas was totally neglected. Spaces which might embrace tow or more meanings were eliminated in functional architecture.
A long philosophical essay :
source : KISHO KUROKAWA


RIKYU GREY AND THE ART OF AMBIGUITY
Read about this color and Japanese Architecture
by KISHO KUROKAWA
. WKD : The Color Gray and Haiku . 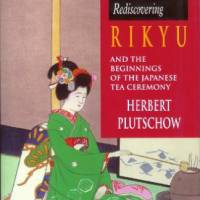 Herbert Plutschow’s “rediscovery” of the great tea master, Sen-no-Rikyu (1522-91), explores the complex relationship between politics and the arts during the final years of the Warring States era. The author is less interested in Rikyu’s achievements and legacy than why his suicide was the inevitable result of the collision of art, politics and ritual. In an object lesson on not mixing politics and aesthetics, Rikyu’s relations with the generalissimo Toyotomi Hideyoshi would prove disastrous. An admirer of Rikyu, Hideyoshi exploited the locations of teahouses as venues for secret political meetings, something that must have deeply unsettled the tea master.
Although the reasons remain largely unexplained, Plutschow comes as close as any writer to revealing the truth of Rikyu’s death: his position, it seems, his very authority and status, somehow represented a slight to the general, prompting him to order the master to commit seppuku (ritual disembowelment). With typical resignation, and a touch of studied disassociation, Rikyu’s death poem, not included in this book, reads:

Seventy years of life
Ha ha! And what a fuss!
With this sacred sword of mine
Both Buddhas and Patriarchs I kill.

first frost --
a smile on the face
of the tea sage Rikyu
Tr. Chris Drake

This hokku was found among Issa's papers after he died (Collected Works 1.650), so its date of composition is unknown, though it is probably from late in his life. Issa uses an epithet (also pronounced chasei 茶聖) to evoke the most famous tea master in Japanese history, Sen no Rikyu (1522-91), who came to be regarded as a sage or wizard. (The term is sometimes translated tea saint, but the worldly Rikyu was not a typical saint.) Rikyu perfected a simple, bare style of tea ceremony that was held in small teahouses in gardens designed to suggest wild nature and carried out as a form of spiritual meditation.

His style of reclusive, Zen-influenced tea ceremony was also perfect for secret negotiations between warlords, and Rikyu overheard many top-secret conversations during his career. The shogun Hideyoshi trusted him and made him his official tea master, but for some reason, perhaps because of a paranoid belief that Rikyu considered himself greater than Hideyoshi, he ordered Rikyu to commit ritual suicide with a sword. Rikyu, living dangerously in a period when various warlords were struggling for power, was portrayed with a very dour look on his face, an expression he must have used when leading tea ceremonies for powerful warriors, but Issa evokes him in a private moment. The implication may be that Rikyu, a commoner who lived and worked in a warrior world, is smiling a rare smile.

It is natural for Rikyu to be smiling, because the appearance of frost indicates that the Way of Tea New Year's is near or has just arrived. The tea ceremony annual schedule began early in the 10th month on the first Day of the Wild Boar (around the middle of November). On this day in Japan all sorts of ovens, hearths, and fireplaces were lit for the first time amid celebrations and the eating of special foods such as boar-shaped rice cakes.

For tea masters, this was the day on which they lit a fire in the sunken hearth in an opening in the straw-mat floor of the tea house. From the 4th through 9th months they used charcoal braziers for heating (but not boiling) water for tea in iron teapots, but they preferred cold weather and sunken hearths. Soon after the hearth was lit, another important New Year's ceremony was held: large, tightly sealed jars of freshly plucked tea leaves from early in the summer were opened for the first time, and the leaves were ground into fine green powder to which not-quite-boiling water was added during the tea ceremony. This powdered tea was the most common form of tea used at tea ceremonies, and grinding the leaves was done with great care.

The first frost in the hokku indicates that the best season of the year for holding tea ceremonies has arrived, and Rikyu has reason to smile. He may also be smiling because the delicate frost will be walked through by his visitors to his morning tea ceremony, adding a dimension of ethereal beauty to the overall performance. There may also be some sort of historical reference to Rikyu's life in the hokku, but it's difficult to determine whether there is or not, since the date of the hokku is unknown.

Above is a famous portrait of Rikyu, a reproduction of which Issa could have seen. In contrast, the smile by the "tea sage" in the hokku is striking. 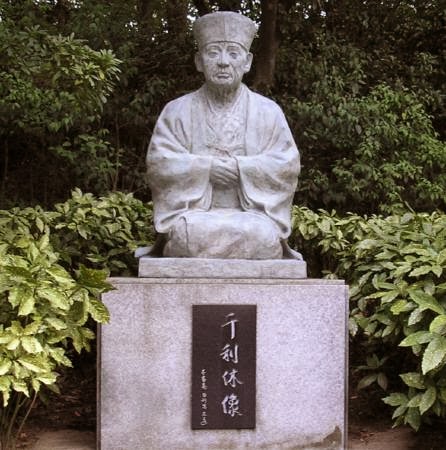