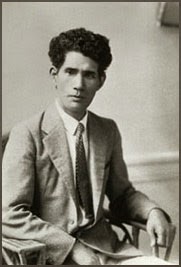 born in Hakata (Fukuota). His given name was Singoro. He studied the Shijo style of painting in Kyoto with Tsuji Kakō (1871-1931). He also studied Heian Buddhist painting and nanga (traditional Japanese painting). He exhibited in the official Bunten, Teiten and Inten exhibitions. Exhibited paintings with Saiko Nihon Bijutsuin (Reorganized Japan Fine Art Academy) in 1915, and became a member in 1916. He is credited with creating a new style of kacho-ga and was one of the foremost painters of his generation.
- source : www.myjapanesehanga.com/home


This print by Tomita Keisen (1879-1936) depicts the priest Mongaku atoning for his sins by standing under Nachi waterfall in winter. About to die, he is rescued by the god Fudo Myo-o (Buddhist Diety of Fire.) 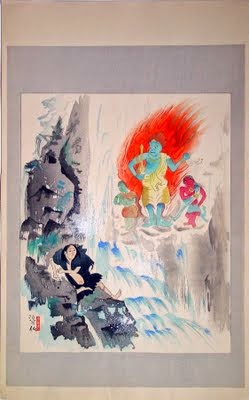 The Story of the Priest Mongaku and the God Fudo
The priest Mongaku is referred to in Chikamatsu's 1714 bunraku play Fair Ladies at a Game of Poem Cards (Kaoyo Utagaruta). The character Takeguchi, who wishes to atone for his sins, invokes the story of Mongaku as follows:

"Well, let me follow the example of Mongaku, who took to the priesthood in consequence of the great love he bore a lady and in time was enabled to lead all his relations to the Pure Land. Life is after all but a dream; reputation and infamy illusions; hatred and compassion but reflections quivering upon the water. Let me hope that my mistake in love will prove to be but a first step on the path of spiritual enlightenment."

Endo Morito, the son of a minor courtier became infatuated with the beautiful Kesa Gozen, the faithful young wife of Watanabe Wataru, a palace guard. She rejected his advances but he was so persistent that she pretended to agree to his proposal on the condition that he first kill her husband.

Kesa concocted a plan where Morito was to steal into Wataru’s room by night. That night, Kesa cut off her long hair and lay down in the darkness in her husband’s bed. At midnight Morito arrived and felt in the darkness until he found the sleeping figure. He immediately cut the head off and ran off. He was horrified to find that he had cut off the head of Kesa Gozen.

He renounced the world and became a monk. For three years he attempted to atone for his crime by the harshest austerities, standing under the icy Nachi waterfall in winter. He was frozen and about to expire, but was saved by Fudo Myo-o (Buddhist Diety of Fire, depicted with a sword in one hand and a rope in the other) and his Acolytes, Kongara and Seitaka.
- source : www.myjapanesehanga.com/home/artists 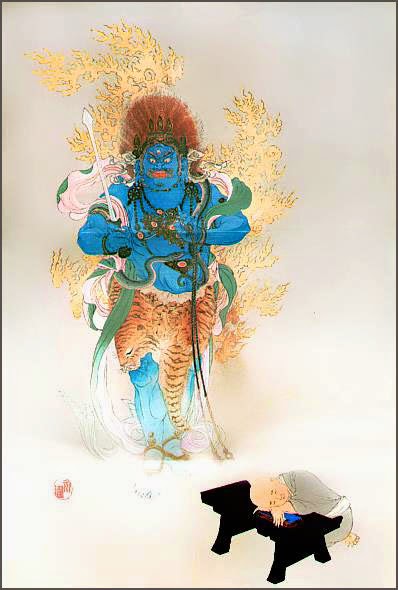