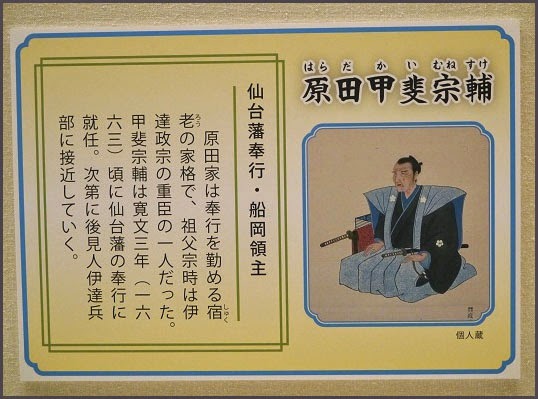 They found the "black box" of Sendai later in the Meiji period.
『伊達の黒箱』 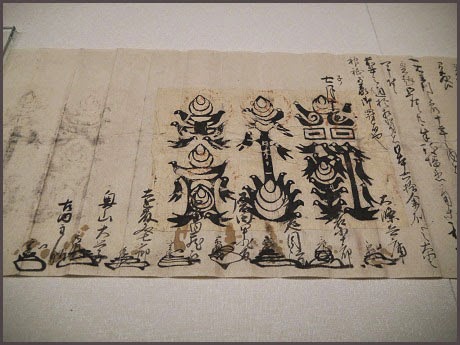 with signatures of the main characters of the "Date Disturbance".
source : blogs.yahoo.co.jp/m_rosso04

a noble family dispute within the Date samurai clan, which occurred in 1671.

- - - - - History
In 1660, the daimyō (feudal lord) of the Sendai Domain, and clan head, Date Tsunamune was arrested in Edo, for drunkenness and debauchery. The charges are generally believed to have been true, but the arrest was probably encouraged heavily by certain vassals and kinsmen in the north. These vassals and kinsmen appealed to the Council of Elders in Edo that Tsunamune was not fit to rule, and that his son Date Tsunamura, great-grandson of Masamune, should become the daimyō. Thus, Tsunamura became daimyō, under the guardianship of his uncles, Date Munekatsu and Muneyoshi.

Ten years of violence and conflict followed in the domain, reaching a climax in 1671 when Aki Muneshige, a powerful relative of the Date, complained to the shogunate of the mismanagement of the fief under Tsunamura and his uncles. The Metsuke (Inspector) for the region attempted to deal with the situation, and to act as a mediator, but was unsuccessful against Aki's determination.

The Metsuke reported back to Edo, and Aki was soon summoned there to argue his case before various councils and officials, including the Tairō Sakai Tadakiyo and members of the Rōjū council. Following his arrival on the 13th day of the second lunar month, he met with and was interrogated and examined, as were several other retainers of the Date on both sides of the dispute. One retainer in particular, a supporter of Tsunamura and his uncles, by the name of Harada Kai Munesuke made a particularly poor impression in his meetings, and is said to have left the interrogation in a sour mood.

Towards the end of the month, all the Date retainers involved were summoned to the Tairō's mansion for a further round of questioning. It is said that over the course of the day, Harada grew increasingly distressed as he realized the extent to which his answers clashed with those of Aki Muneshige. According to one version of events, Harada, following a series of questions, was waiting in another room when Aki came in and began to shout insults at him. Swords were then drawn, and Aki was killed. Harada was killed moments after, by the officials or their guards.

A trial was soon held, the murder being made a more severe crime for having been committed in the home of a high government official. The official verdict was that Harada drew first, and the punishment was severe. The Harada family was destroyed, Harada's sons and grandsons executed, and though Tsunamura was affirmed as the proper daimyō, his uncles were punished. Aki was judged to be a paragon of loyalty, and no action was taken against his family.

This story inspired a number of cultural productions, most notably the jōruri (puppet theater) play, later adopted into kabuki, Meiboku Sendai Hagi, by Chikamatsu. In this production, as in many other retellings of the tale, Harada is undoubtedly the villain, Aki the hero. Historians, however, are skeptical about the accuracy of this black-and-white approach, and claim that there were likely other elements to the narrative which are not clear from the formal records. One side or the other in the dispute may have bribed government officials in order to affect the government's handling of the situation, and it is known that Sakai Tadakiyo was a friend of Tsunamune, thus perhaps altering the shogunate's behavior in this matter further.
- - - More in the WIKIPEDIA ! 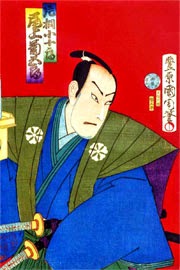 - - - - -  History
Kawatake Shinshichi II's drama "Hototogisu Date no Kikigaki" was premiered in June 1876 at the Shintomiza. Some roles names were changed later on: Katagiri Kojûrô, Masaoka, Serada Kai, Asahino Yagorô and Matsugae Tetsunosuke became Katakura Kojûrô, Asaoka, Harada Kai, Asahina Yatarô and Matsumae Tetsunosuke.
The title "Jitsuroku Sendai Hagi" was used for the first time in May 1893 in Tôkyô at the Fukanoza.

Summary
Harada Kai, a Date vassal, and his confederates are plotting to usurp the power and position of the young leader of the clan, Kamechiyo. They have attempted to poison him, but their efforts have so far been thwarted by those loyal to the boy, particularly his menoto, Asaoka. She is keeping a close watch over him in the inner, women's quarters of the Date mansion. A senior retainer in the Date household, Katakura Kojûrô, warns Asaoka that the day of a retaliatory strike against Harada and the other conspirators is near. Asaoka is relieved to hear it, but she continues to keep a close watch over her charge.

Asaoka also has a small son of her own, Chiyomatsu, whom she deliberately left behind in Sendai, the better to protect the little lord of the Date clan. But Kojûrô has brought Chiyomatsu with him. Asaoka's devotion to Kamechiyo and her determination to protect him are so strong that she refuses to recognize her own son. Fearing that any relaxation of her guard will expose Kamechiyo to danger, she orders her son to be taken back to Sendai. Kamechiyo has been lonely, however, and welcomes Chiyomatsu as a playmate. This makes it all the more difficult for Asaoka to send her son away.

Katakura has been watching all this from a neighboring room. He enters and commends both Asaoka and her son for their loyalty towards Kamechiyo. He then leaves, taking Chiyomatsu with him. Left alone, Asaoka gives way to her feelings and expresses her grief at the departure of her beloved son. At that moment, however, the alarm is raised following the death by poisoning of one of those required to taste Kamechiyo's food. Asaoka takes a grip on herself and resumes her watch over the boy.
- source : www.kabuki21.com


- quote
Meiboku Sendai Hagi
We eat o-hagi(or botamochi) at Higan in spring and autumn. It's called ohagi in the season for hagi(萩:Lespedeza or Japanese bush clover).
snip
Chinese characters "伽羅" are commonly read "kyara." Kyara(伽羅, aloes-wood) is a high-quality agarwood(沈香, jinkou). The 3rd lord of the Sendai clan went to brothels very often, wearing precious wooden clogs made of aloes-wood.
Sendai Hagi (先代萩) comes from the former(先代, sendai) lord's favorite Lespedeza buergeri(木萩, kihagi).
By the way, there is a sequel to the incident.
In 1923, a covenant under joint signatures was discovered In the attic of a temple. The covenant says that a Buddhist memorial service for the chief retainer was held at the temple six years after his death and 139 of his former retainers attended it. Memorial service for him has been held at the temple every year.

The name of the chief retainer is Harada Kai (原田甲斐), who is named Nikki Danjou  (仁木弾正) in the play. He gets categorized as a devil in the play, but there are strong doubts about whether Harada Kai who endeared him to many people was a villain.

Many people gather from the covenant that there were complicated circumstances behind the incident.
- source : ichinen-fourseasonsinjapan 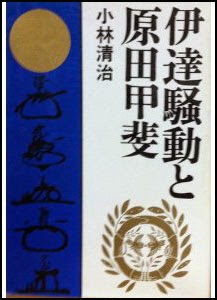 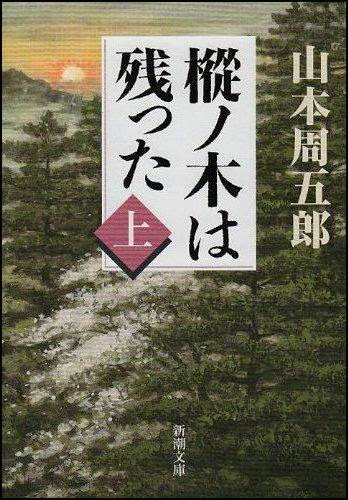 Yamamoto san tries to portrait Harada Kai as the savior of the Date clan, who took the blame for the intrigues on himself and died a silent hero.

A senior retainer of the Date clan of Sendai, and the lord of Shiroishi Castle, Katakura Kagenaga played a major role in containing the Date Incident of the 1660's.

In 1660, the 20-year-old daimyo of Sendai, Date Tsunamune, was arrested in Edo for drunkenness and debauchery. His relatives and a number of his vassals then petitioned to have him removed from his position and be replaced by his one-year-old son, Tsunamura. The child was by then under the guardianship of his two uncles, Munekatsu and Muneyoshi, who had apparently manipulated the succession for their own ends.

In the following ten years, poor administration by the two uncles led to great civil unrest, and a number of violent uprisings involving the Date clan samurai, townsfolk and peasantry. In an effort to quell the uprisings and restore law and order within the Sendai Han, a high ranked relative of the Date clan, Aki Muneshige made a formal complaint to Edo in 1681. The matter was thoroughly investigated following the scandalous murder of Aki Muneshige, by another top ranked official, the corrupt Harada Munesuke, who killed Aki in order to hide his own involvement in the affair. Once the inspectors sent from Edo uncovered the incidents, the two uncles, Munekatsu and Muneyoshi were eventually punished.

As caretaker for the young Date Tsunamura, and as Karo, or chief retainer Katakura Kagenaga took the initiative to invoke emergency action at the peak of the incident, and bringing the domain to order, prevented further troubles, which kept the domain, and more importantly, the Date clan from political ruin. Katakura resigned his post shortly after the incident was resolved. He died July 9, 1681, aged 50. 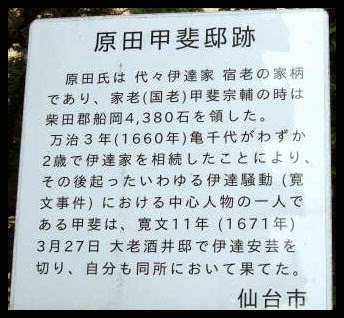