She was friends with Kobayashi Issa, 雪中庵蓼太 (大島蓼太 Oshima Ryota) and other haijin of her times.

In February of 1798, she had a memorial stone for Matsuo Basho placed at 鹿野山神野寺 Jinja-Ji.
最中の桃のなかより初さくら

On the 2nd day of the 7th lunar month in 1804, Issa came to Kisarazu and then to 富津 Futtsu in Chiba.
Issa wrote

On the third day of the fourth lunar month in 1802, Hakyo died.
Her grave is at the temple 普戴山大乗寺 Daijo-Ji in Futtsu.

On the 13thd ay of the 7th lunar month, Issa visited her grave and later the Orimoto family, where he stayed for a while. 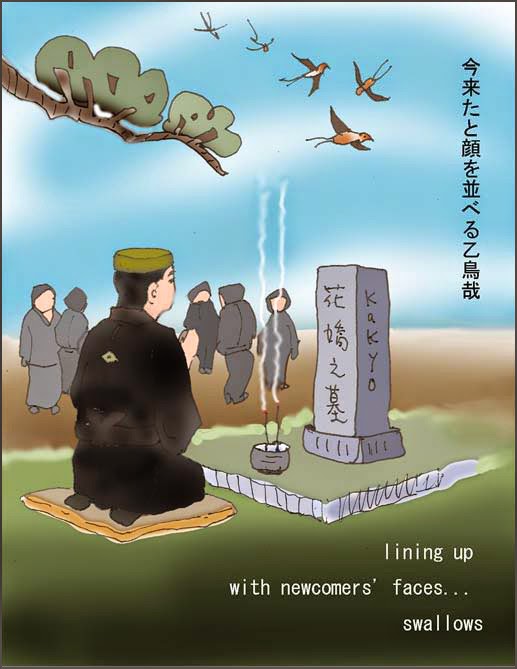 Mrs. Kakyo Orimoto was Kobayhashi Issa’s haiku student as well as reliable sponsor.
1810 July she died, he knew it but couldn’t attend her funeral ceremony.
After two years on her memorial day, he came to her tomb to pray for her soul.

This hokku is from lunar 7/13 (August 12) in 1810, the hundredth day after the death of Orimoto Kakyou (織本花嬌, hereafter Kakyo), a well-known haikai poet married to a village headman in the area east of Edo. She was one of Issa's most enthusiastic and talented supporters, and Issa must have been deeply grieved when he learned she had died on 4/3. He was traveling at the time, but later he took a boat east across Edo Bay and attended the important hundredth-day requiem service for her at Daijoji, a Buddhist temple of the Pure Land school founded by Honen. On the hundredth day a soul was believed to become a "Buddha," since it had decisively left this world and had entered the other, where it was now on its way to liberation or to the Pure Land.

This hokku is the third Issa wrote on the day of the Buddhist requiem service for Kakyo. It is thought to refer to Kakyo's granddaughter, a budding haikai poet who was being tutored by Kakyo. The age of neither Kakyo nor her granddaughter in 1810 is known, but the granddaughter must have been fairly young, since she is still wearing sandals with red thongs. In the midst of all the dark colors no doubt worn by the other people at the service, Issa seems to regard the granddaughter's red sandal thongs to be a small but strong assertion of the power of life and rebirth. Issa had no doubt met the granddaughter earlier when he visited Kakyo's house to lead haikai meetings there, so he may take the red thongs, which seem to stand out in the dim lantern light, to be a sign that Kakyo's creative spirit still lives on in the haikai and the flamboyant assertion of color by her protege, her granddaughter.

In once sense the red sandal thongs may literally refer to Kakyo's return to this world. The headnote, the red color, and the night setting all seem to indicate that this hokku is not about the requiem service but about a later ceremony that evening to welcome Kakyo's soul back to the world of the living. The date of the requiem for Kakyo happens to be the day before the beginning of the very important half-Buddhist, half-shamanic Bon Festival of Returning Souls held on lunar 7/14-16, that is, at the time of the first autumn full moon. It is an evening on which almost all families, especially those with a death during the previous year, pray to the souls of their loved ones, welcoming them and asking them to return and spend the next three days with them.

To welcome the souls, relatives carry lanterns from their houses to the person's grave, and there they place at least one lantern to show the soul the location of the grave. After making welcoming prayers, each family, still carrying lanterns, guides the soul back to its former house. Similar ceremonies are carried out at graves at the end of the festival, when visiting souls are sent off on the evening of lunar 7/16. Kakyo's grave is in Daijoji Temple, where the requiem was held earlier in the day, so lanterns would probably be placed near her grave while relatives and friends welcome her returning soul, which has only recently entered the other world. The red worn by Kakyo's granddaughter may literally seem to Issa to indicate the color of life, and he may believe with others at the grave that Kakyo's soul is alive and temporarily among them once more. Could Issa be seeing a double vision of Kakyo's granddaughter and of the young Kakyo herself, once more young? That would explain why he stresses "visible" or "appears."

Kakyou's husband died in 1794, and she did not remarry, but as the widow of a powerful village headman, she could not have felt free to have affairs with other men. In spite of the class distance between Kakyo and the lowly Issa, however, many commentators are fond of stating that Issa must have deeply but platonically loved the older Kakyo, who became his secret love throughout his life. There is no evidence to either support or disprove this perennial theory, and Issa's main requiem hokku for Kakyo, also written on 7/13 and placed two verses before the above hokku in his diary, is supremely ambiguous:

wildflowers,
what you say and tell --
autumn wind

The haikai name Kakyo means Beauty of Flowers (or Floral Beauty), so Issa seems to be addressing both the autumn flowers of the fields around him and Kakyo's soul. Of course the wildflowers also suggest Issa -- as well as an imagistic overlap of Issa with Kakyo -- so Issa may be indirectly identifying himself with Kakyo here. Autumn wind is traditionally a sad and lonely image, and even the flowers now speak its language, though they may be saying other things as well which will never be explicitly uttered. 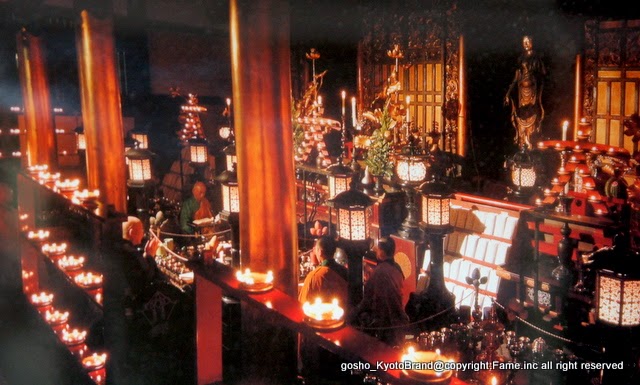 source : kyoto-brand.co
An image of Rokuharamitsuji Temple in Kyoto, with soul-welcoming fires and a statue of the merciful bodhisattva Kannon 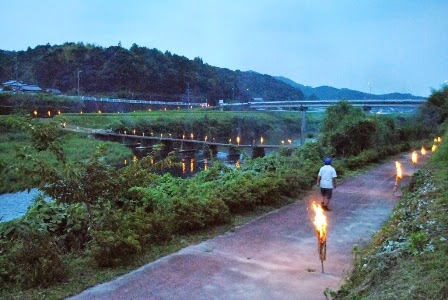 source : blog-imgs-36-origin.fc2.com/h/a/n/hanpei
Fires lighting the way for souls from a graveyard to a village 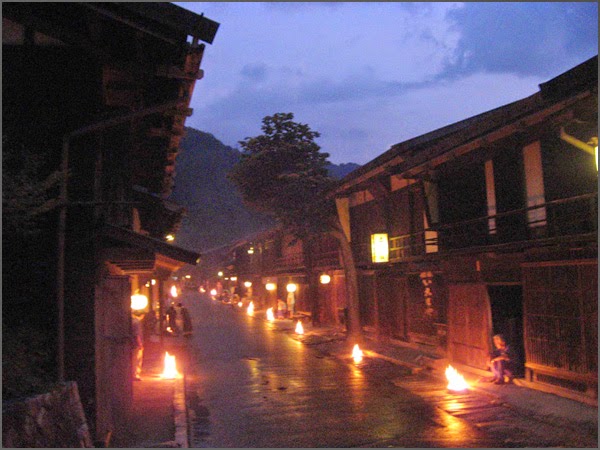