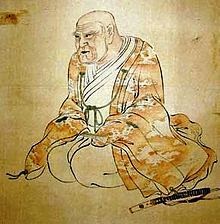 Tōyama Kagemoto (遠山景元) Kinshiro 金四郎
a hatamoto and an official of the Tokugawa Shogunate during the Edo Period of Japanese history. His ancestry was of the Minamoto clan of Mino Province. His father, Kagemichi 遠山景晋, was the magistrate of Nagasaki.
Kagemoto held the posts of Finance Magistrate, North Magistrate, and subsequently the South Magistrate of Edo. (The magistrates of Edo acted as chiefs of the police and fire departments and as judges in criminal and civil matters.)

Tōyama's rose to the Lower Junior Fifth rank with the name Tōyama Saemon no Jō Saemonnojo.
© More in the WIKIPEDIA ! 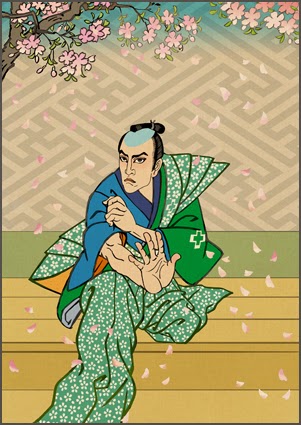 His father had adopted another boy of the family for his heir, so Kinshiro in his youth had no prospects for a good future and spent a lot of time in the pleasure quarters of Edo.
During that time he might have acquired some tatoo like the men of the city used to favor.
Only when the family heir died at an early age Kagemoto became the head of the family and started his career as a governor of Edo.

When his superior Mizuno tried to relocate the three Kabuki theaters to a far-away location, Toyama intervened on behalf of the people, since Kabuki was one of their few leisure activities at that time in Edo.

His real fame came later, when the Kabuki world was paying him back for his benevolence with a play in the Meiji area and the kodan story tellers took up the subject.
And with the advent of TV series and movies, he became a real star in Japan. 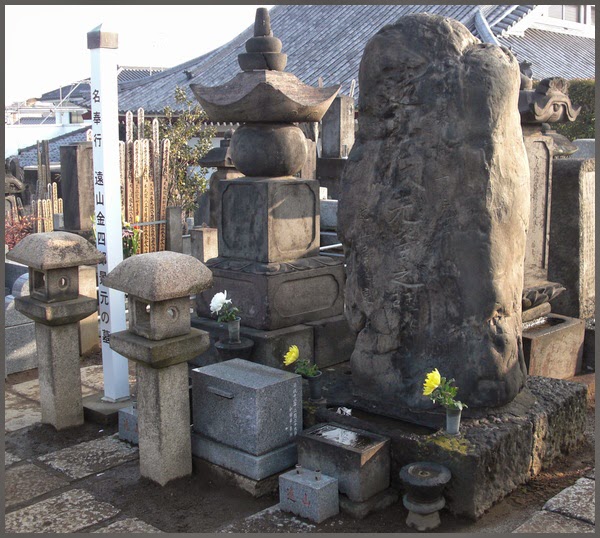 
Three leisure acitivites in Edo
Sumo, Kabuki and the Pleasure quarters - having a drink together 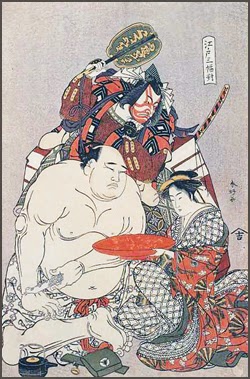 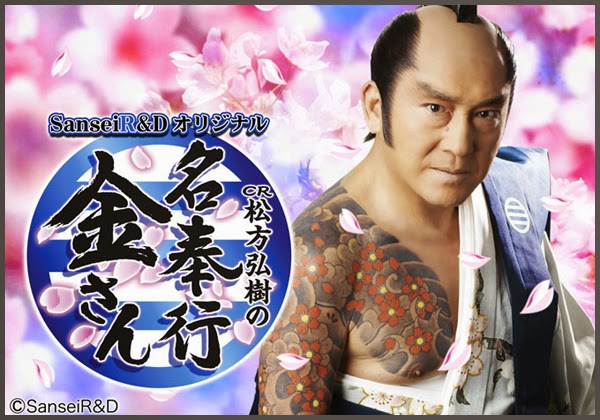 Tōyama no Kin-san (遠山の金さん)
is a popular character based on the historical Tōyama Kagemoto, a samurai and official of the Tokugawa Shogunate during the Edo Period of Japanese history. In kabuki and kōdan, he was celebrated under his childhood name, Kinshirō, shortened to Kin-san. He was said to have left home as a young man, and lived among the commoners, even having a tattoo of flowering sakura trees on his shoulder. This story developed into a legend of helping the common people.

The novelist Tatsurō Jinde (陣出達郎) wrote a series of books about Kin-san. Noted actor Chiezō Kataoka starred in a series of eight Toei jidaigeki films about him. Several Japanese television networks have aired series based on the character. These variously portrayed him pretending to be a petty hood or a yojimbo samurai while solving crimes as the chief of police. 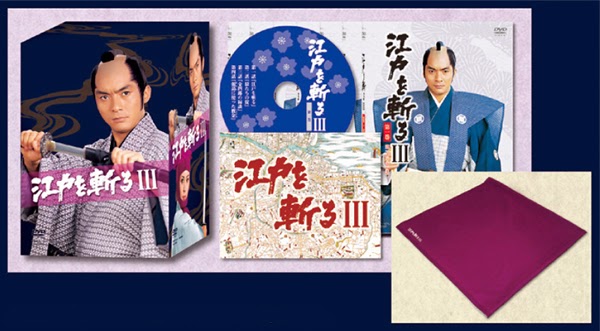 a popular jidaigeki on Japan's Tokyo Broadcasting System.
During the decades from its September 24, 1973 premiere until the July 25, 1994 finale, 214 episodes aired. It lasted through eight series, with several casts and settings. It ran on Monday evenings in the 8:00 – 8:54 prime time slot, sponsored by National, and remains popular in reruns.

The first series featured popular actor Takewaki Muga, a co-star in the network's program Ōoka Echizen, which alternated with Edo o Kiru in the same time slot. He played Hoshina Masayuki, half-brother of shogun Tokugawa Iemitsu, masquerading as Azusa Ukon in a good-over-evil drama set in Edo. Also on the cast was Matsuzaka Keiko, who continued in the next several versions of the show.

Versions two through six starred the popular actor/singer Saigo Teruhiko in the role of Toyama Kagemoto, or Tōyama no Kin-san, a samurai who lived among the commoners, to the point of having a huge sakura tattoo drawn on his shoulder, but later became chief administrator of Edo. In this version of the Kin-san story (which has been the subject of several other series), Kinshiro lived in the house of the woman who had been his nursemaid (played by Masumi Harukawa, later O-Sai of Abarenbo Shogun), the proprietor of a fish-dealer. O-Yuki (Keiko Matsuzaka), pretending to be her daughter, is actually a daughter of Tokugawa Nariaki, daimyo of the Mito domain, and eventually marries Kin-san.
Wearing a purple cloth over her head and face, and wielding a sword in the Yagyū Shinkage-ryū manner, she works outside the law to bring justice to the wicked. At her right hand is an employee at the shop, Jirokichi (kabuki actor Matsuyama Eitaro, 1942–1991). The former Robin Hood-style thief Nezumi Kozō, he became an undercover agent for the Kin-san/O-Yuki team.
Morishige Hisaya (1913– ) played Nariaki in special guest appearances.

A major cast change brought veteran jidaigeki actor Kōtarō Satomi to the lead role, again as Kin-san, for the seventh and eighth series.
- - - More in the WIKIPEDIA !