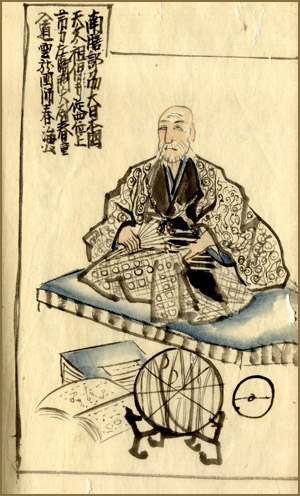 - quote
also known as Shibukawa Harumi, Yasui Santetsu II 二世保井算哲, and
Motoi Santetsu 保井 算晢, was a Japanese scholar, go player and the first official astronomer appointed of the Edo period.
He revised the Chinese lunisolar calendar at the imperial request, drawing up the Jōkyō calendar which was issued in 1684 during the Jōkyō era. In 1702, he changed his name to Shibukawa Sukezaemon Shunkai and retired by 1711. As a go player, he was affiliated with the Yasui house, calling himself initially (after his father) Yasui Santetsu II. He is mentioned as a Tengen player in Yamashita Keigo 's book: Challenging Tenge.
© More in the WIKIPEDIA ! 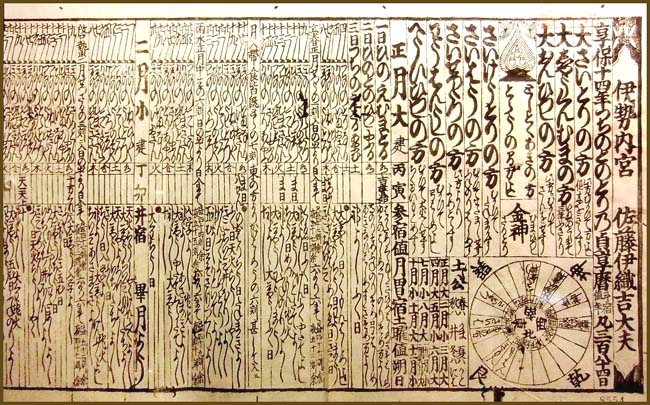 The Jōkyō calendar (貞享暦 Jōkyō-reki) was a Japanese lunisolar calendar, in use from 1684 to 1753. It was officially adopted in 1685.
The Jōkyō-reki system was developed and explained by Shibukawa Shunkai. He recognized that the length of the solar year is 365.2417 days.
Shibukawa discovered errors in the traditional Chinese calendar, the Semmyō calendar, which had been in use for 800 years.


Japan has been using the Gregorian calendar since 1874,
but still refers to its KYUREKI 旧暦, the old calendar, on many occasions.
. Calendar Systems of Japan - Introduction .
Calendar History / Local calendars / E-goyomi (Picture calendar) / Daisho-reki calendars / Various forms of calendars

Harumi was born into a family of go-players to the shogunate, but was also interested in mathematics and astronomy. At that time Japan was still calculating the calendar using the Tang calendar the Senmyô calendar 宣明暦, which it had adopted in 8612, and inaccuracies in the calendar were obvious, especially that the winter solstice was calculated almost two days late. Also, it was not very accurate with eclipses, in particular predicted far too many. Harumi like some other scholars of the time believed that the Mongol-period Juji calendar 授時暦, which was the apex of the Chinese calendar tradition,should be adopted in Japan.

Through his professional connections as a go-player he was able to interest several officials in the project, especially Hoshina Masanori 保科正之 of Aizu, the shogun's guardian, and Mito Mitsukuni. He made a table of eclipses as predicted by the Senmyô and Juji calendars to prove the superiority of the later.

However, on 1675/5/1 an eclipse that was predicted by the Senmyô calendar but not by the Juji calendar did occur, and so the idea of changing calendars was rejected. Harumi managed to get hold of a (forbidden) Chinese work on western astronomy, and "localized" the 13th-century Chinese calendar for 17th century Japan, and in 1683 petitioned the imperial court to adopt the "Yamato" calendar. However, the next year the court decided to adopt the Ming-period Daitô calendar 大統暦, a very slight revision of the Juji calendar. Harumi again petitioned, saying the Daitou calendar was not suitable for Japan, and finally on 1684/10/29 the Yamato calendar was accepted, and it went into effect the next year as the Jôkyô calendar 貞享暦.

After that, the shogunate established the office of the Tenmon gata 天文方, and Harumi became the first holder of that post. He had an observatory on his property and built some astronomical instruments.
- source : wiki.samurai-archives.com -


tenmongata, tenmonkata 天文方 - Astronomical Bureau with officer in charge of astronomy
Members of Yoshida family inherited the position of Tenmonkata until the end of Edo period. 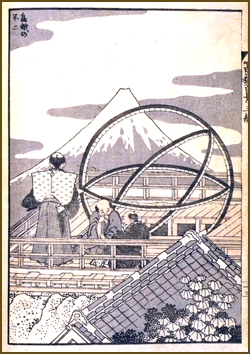 Hokusai Katsushika was a well-known ukiyoe artist who was active in the late Edo Period. The Asakusa Observatory, equipped with an armillary sphere, is depicted against a backdrop of Mt. Fuji in "Torigoe no Fuji," which is a print contained in "One Hundred Views of Mt. Fuji" by Hokusai.
At the observatory, Yoshitoki Takahashi, an official astronomer, and others observed celestial bodies in order to conduct the Kansei calendar reform. Tadataka Inoh was a disciple of Yoshitoki.
(Reference: Taito Meisho Zue)
. Edo Torigoe 鳥越 Torigoe Ward (Torikoe) .

Heitengi Zukai (1802)
"Heitengi Zukai," a handbook of astronomy, was written by Zenbe Iwasaki, who was also a maker of telescopes. The book includes illustrations of the sun, the moon and stars, which were observed by him using a refracting telescope. 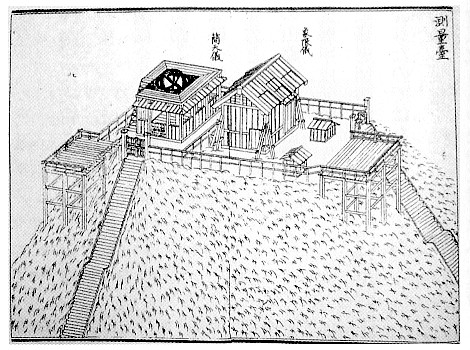 - quote -
Asakusa Observatory
. . . until about 170 years ago, Asakusabashi was scientifically and technologically one of the most important places in Japan thanks to the astronomical observatory that used to be here, and which included offices for the study of the latest scientific literature from overseas.
Not far from where the observatory was is a signboard, on the south-west corner of Kuramae 1-chome intersection. The following is a full translation of the Japanese information on the signboard (which is only partially translated into English on the signboard).
- - - Site of Astronomical Observatory
In the late Edo era, a little west of this spot, was an astronomical observatory on a road running through an area comprising the whole of Asakusabashi 3-chome 21-24 banchi, and part of 19-, 25- and 26-banchi. Besides astronomical observation, it also hosted other pursuits such as calendar-rule research, surveying, compilation of topographical data, and the translation of Western books.

The observatory was known as Shitendai or Asakusa-tenmondai, and was transferred here in 1782 from Ushigome-waradana (current day Fukuromachi in Shinjuku ward) and rebuilt. It was officially named Hanrekidokoro-goyoyashiki ("The Imperial Office of Calendar Making") which, as the name suggests, was part of the government office, the Tenmongata, for working out the calendar. Astronomical observations were required to ensure calendar accuracy. 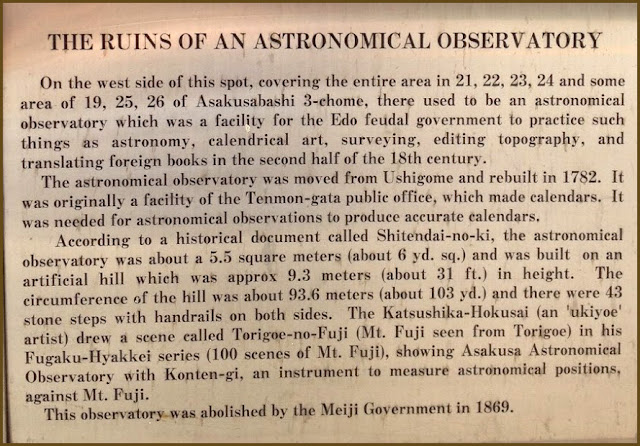 According to a historical document known as Shitendai-no-ki ("Shitendai Records"), the Shitendai observatory was built on top of an artificial hill about 93.6 meters in circumference and about 9.3 meters high. The observatory was a square building, with each wall about 5.5 meters long, access being provided by 43 stone steps. Another historical record, the Kansei-rekisho ("Chronicles of the Kansei Era") states that there were two separate flights of stone stairs, each of 50 steps, and that the artificial hill was 9 meters high.
- snip -
It was here at the Asakusa Observatory that the astronomer Takahashi Yoshitoki (1764-1804) revised the calendar for the Kansei era (1789-1801). One of his understudies was Ino Tadakata (1745-1818), a surveyor and cartographer known for completing the first map of Japan. Before starting his survey of the whole of Japan, Ino first set out to establish the length of one degree of latitude by working out the direction of the observatory from his house in Fukugawa and the distance between them. After Takahashi’s death, upon the advice of his son and heir, Kakeyasu, in 1811 an office for translating foreign books, the Bansho-wage-goyo (蕃所和解御用), was established on the premises.
This office underwent many transformations: from Yogakusho ("Center for Western Learning"), to Bansho-shirabesho ("Western Learning Research and Educational Institute"), to Yosho-shirabesho ("Western Writings Institute"), to Kaiseisho/Kaiseijo (“Office for Opening and Developing”), to Kaisei Gakko (“School for Opening and Developing”), to Daigaku-nanko (“University Southern School”), and was a precursor institution of the current University of Tokyo.

Another observatory was built at Kudanzakaue (present day Kudankita, Chiyoda ward) in 1842, but both were abolished in 1869, in the second year of the modernizing Meiji era.
- source : japanvisitor.blogspot.jp - 1999 - 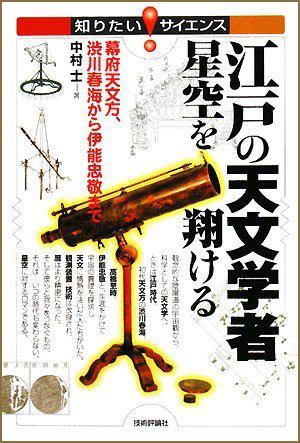 Edo Ushigome Fukuromachi 江戸牛込袋町
.
In 1765 the 司天台 government observatory was relocated here, but the many trees in the area were a distraction and the observatory was moved to Asakusa in 1782.
.
https://edoflourishing.blogspot.jp/2017/03/ushigome.html
.