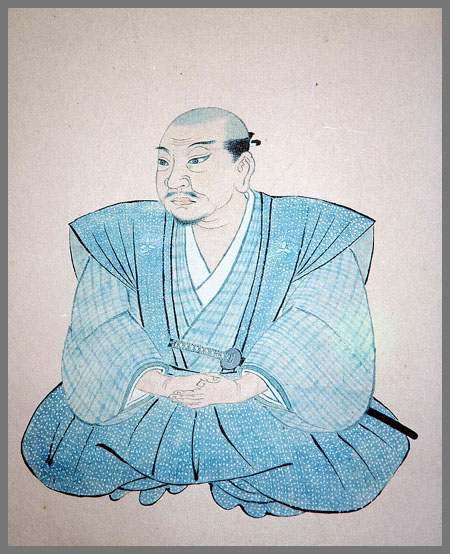 - quote
a Japanese Confucian philosopher known as "the sage of Ōmi" 近江聖人.
Nakae
was a feudal retainer who lived during the Tokugawa shogunate. He taught that the highest virtue was filial piety (kō), and acted upon this, giving up his official post in 1634 in order to return to his home in Takashima, Ōmi to care of his mother. He distinguished, however, between sho-kō and dai-kō: lesser and greater filial piety.
Sho-kō involves the normal care owed by children to their parents;
dai-kō involves the notion that our human parents are themselves the children of the divine parents — thus, if one's parents are wrong, then one should encourage them to return to virtue.

He was unusual in believing that his teaching would be useful to women as well as men. While accepting the then standard view of women as usually lacking such virtues as compassion and honesty, he argued: "if a wife's disposition is healthy and pious, obedient, sympathetic and honest, then ... every member of her family will be at peace and the entire household in perfect order."

Nakae originally followed the teachings of the Chinese neo-Confucian philosopher Zhu Xi, but eventually became more influenced by Wang Yangming (1472–1529), who argued for the primacy of human intuition or conscience over intellect: moral improvement arises out of conscience-based action (compare Aristotle's ethics). Nakae added a more religious aspect to Wang's "School of Intuition of Mind", calling the human conscience the "divine light of heaven". Nakae's works also supplied his followers (such as Kumazawa Banzan [1619–1691]) with "the moral foundation for political action".

- - - - - Selected works
In a statistical overview derived from writings by and about Toju Nakae, OCLC/WorldCat encompasses roughly 130+ works in 200 publications in 5 languages and 740+ library holdings. 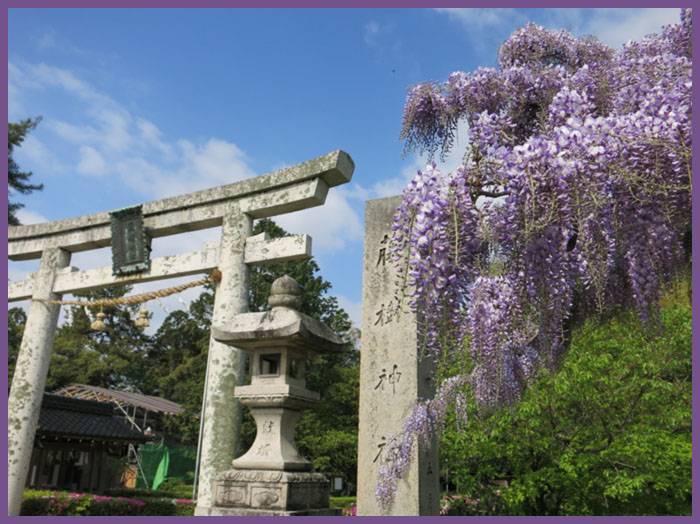 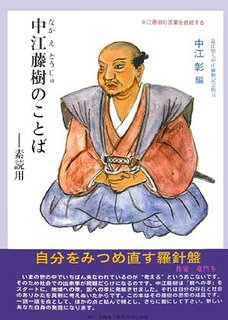 - quote -
The Loss of Filial Piety Led to the Bankruptcy of the Nation.
The spirit of Toju Nakae
pointed out that efforts had been made to dismantle Japanese culture after the Second World War. This included a demolition of the Japanese household system. This household system was based on the tenets of ‘filial piety’, and the army of the occupation eradicated the filial piety that Confucians advocated. The military also eliminated the teachings on memorial services to ancestors that have been taught by Buddhism and Shintoism.

Toju analysed the root cause of the budget deficit, which an increase in social security caused. It has become a major issue in contemporary politics, and he said that politicians currently report on the problem with pensions, healthcare, and medical treatments, but if they were all to re-establish the concept of ‘filial piety’, then the ultimate result would not be a national bankruptcy, which many leaders predict for the future of Japan.

- - - - - Edo Japan Surpassed China
With regard to current educational problems, he pointed out a lack of moral education. Toju said that the present-day system excessively trivializes morals, and teachers are increasingly unable to address them.

He added, moreover, that with regard to the absence of religious convictions as a basis for morality, most of society has lost their faith and spirituality. The general public has become spineless, and the country is in a miserable state now. He expressed teachers firstly need to develop their religious faith.
Toju also expressed criticism with respect to the abolition of high school tuition fees, implemented by the then ruling Democratic Party, and said what at first glance seemed like a good idea, could also be viewed as a further trivialization of the educational system. According to Toju, there is nothing worse than a free education. Even for a poor family, one of the greatest pleasures afforded to a parent once used to be the ability to spend money on tuition and get a child into a good school.

In addition, Toju elaborated on the historical significance of the popularity of Confucianism during the Edo Period. Toju emphasized how Japanese academic prowess had already surpassed that of China by the Edo Period. He remarked, “During the Edo Period, advances in Japanese scholarship surpassed those of China, Confucianism’s country of origin. This cultural background supported the Meiji Restoration. Scholarship actually took the place of the Edo class system. The academics of Japan are highly advanced and surpassed that of China. And the people of the Edo period developed a culture which became a model for the world.”

Toju Nakae was a pioneer in creating the advancement of Confucian culture during the Edo Period, and his spirit revealed that he was also a major player around the time of the founding of Japan (he was formerly Ame no minaka nushi no kami, the Lord of the August Center of Heaven). Furthermore, this Shinto god guided Confucius (from the spirit world). It reincarnated as Toju Nakae, the founder of the Japanese version of Neo-Confucianism, which Wang Yangming originally established in China, and Toju became a catalyst for the creation of Japan’s spiritual spine. Through this lineage, the patriots of the Meiji Restoration such as Shoin Yoshida were born.
- reference source : eng.the-liberty.com -

Nakae Toju was born a peasant farmer's son in 1608, which was eight years after the battle of Sekigahara. At the age of nine, he was adopted by his grandfather who served under the Yonago Clan and taken to Yonago (in present Tottori Prefecture) leaving his parents. When he was eleven years old, his family moved to Ozu in Shikoku according to their lord's dominion transfer. It was the time when Toju determined his course of life to accomplish his learning.
Diligent Toju taught his theory even to his peers. While doing so, he passed no single day without turning his thoughts toward his mother living lonely in his native village. He therefore made up his mind to resign his post and return home to be with her when he was twenty-seven. Many people who adored Toju's attractive personality also moved to the village on after another being eager to learn from him.
Making every effort to make his mother relieved, he further deepened his study together with his disciples (he called them "Doshi" (Comrade) and interacted with local villagers equally to show them the right direction of life to which they should proceed. In 1648, he ended his life as young as forty-one years old.
Toju was the first Japanese who was titled as "Saint." He sympathized with Wang Yang-Ming's thoughts in the beginning, then developed it into his original way and established his own school. This is the reason why he has been respected as the founder of Japan's Yang-Ming-ism.

His family name was Nakae; original personal name was Gen; Chinese style name was Korenaga; commonly known name was Yoemon; and pseudonym was Mokken and Koken.
He set up the school regulations of Toju Shoin and named it "Toju-ki" after an old wisteria in the premises. According to this, his disciples and villagers respectfully called him "Master Toju. (Master Wisteria)"

"Ai-kei" (reverence)
Toju believed that reverence is an essential idea we should always retain inside our mind.
"Chi-Ryo-Chi"
Every man was born with a beautiful mind called "Ryo-Chi." 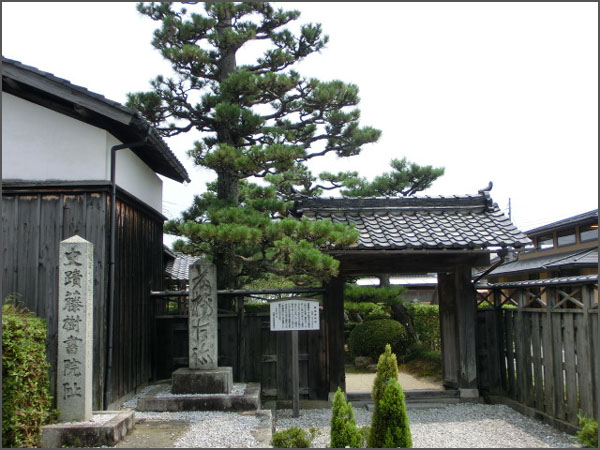 - - - - - History of Toju Shoin
Toju built a simple schoolhouse in the premises and instituted the school rules, "Toju-ki," when he was thirty-two years old, which was five years after his return from Ozu. His disciples built a new lecture hall afterwards, which was half a year before Toju ended his short life at the age of forty-one.
At the very time when his followers were about to succeed Toju's theory systematically, the Omizo Clan, which ruled this area, ordered them to dissolve the school and go out of the area. It was because the authorities could not permit them getting together to learn the spirit of "Chi-Ryo-Chi" before the political constitution of Japan was established.
Under the difficult condition, the followers secretly continued their meetings. It was not until about seventy years after Toju's death that their activity was publicly resumed. After this turning point, many literates from around the country visited here to give lectures, and in 1796, the Emperor Kokaku named the lecture hall "Tokuhon-do."
Many volunteers such as Kumazawa Banzan, Toju's direct disciple and a distinguished Confucian in the 17th century, had cherished Toju Shoin. In 1880, however, their effort turned out in vain as it was burnt down because of a big fire that consumed the whole village. The villagers managed to save the treasures from the fire, and two years later, they reconstructed a tentative lecture hall that has existed to this day. They abandoned their burning house and took a risk to carry out all the properties kept in Toju Shoin, such as treasures, daily necessaries, and books.
Moreover, the faithful villagers hoped to reconstruct the hall before they built their new house.

Annual events of Toju Shoin
- snip -
Bou： Appearance
Interact with others respectfully in peaceful appearance.
Gen： Speech
Speak to others in the way you are comfortably received.
Shi： Sight
Look at others and things respectfully and warmheartedly.
Cho： Hearing
Listen to others sympathetically from the speaker's point of view.
Shi： Consideration
Understand and think of others respectfully. 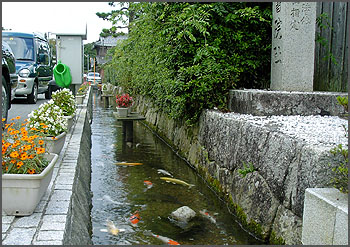 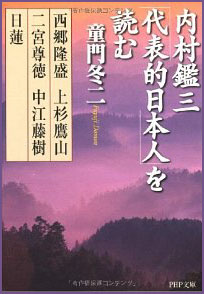 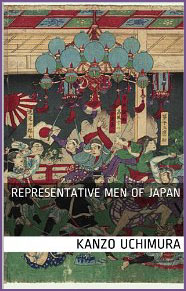 
Uchimura Kanzō 内村鑑三
(March 26, 1861 – March 28, 1930) was a Japanese author, Christian evangelist, and the founder of the Nonchurch Movement (Mukyōkai) of Christianity in the Meiji and Taishō period Japan.
He is often considered to be the most well-known Japanese pre-World War II pacifist.
- - - More in the WIKIPEDIA !


. Neo-Confucianism in the Edo period .

Email ThisBlogThis!Share to TwitterShare to FacebookShare to Pinterest
Labels: - - - NNN - - -