- quote -
a Buddhist priest and a scholar of Kokugaku in the mid Edo period. Keichū’s grandfather was a personal retainer of Kato Kiyomasa but his father was a rōnin from the Amagasaki fief. When he was 13, Keichū left home to become an acolyte of the Shingon sect, studying at Kaijō in Myōhōji, Imasato, Osaka. He subsequently attained the post of Ajari (or Azari) at Mount Kōya, and then became chief priest at Mandara-in in Ikutama, Osaka. It was at this time that he became friends with the poet-scholar Shimonokōbe Chōryū (下河辺長流:1624 – 1686). 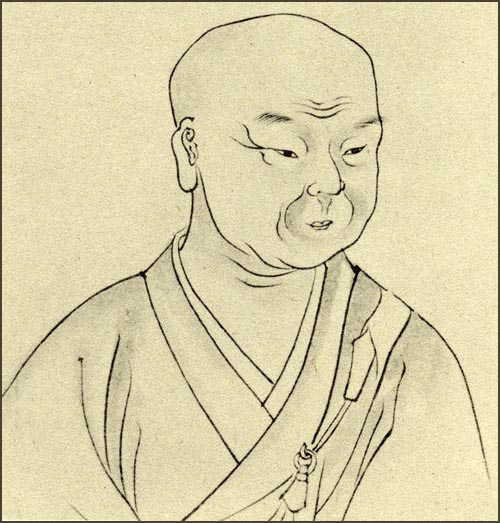 However, he disliked the worldly duties of his work and, after wandering around the Kinki region for a while, made his way back to Mount Kōya. Deeply influenced by the thinking of Kūkai, he also read widely in the Japanese classics under the patronage of Fuseya Shigeta (伏屋重賢), a patron of the arts in Izumi Province. After serving as chief priest at Myōhōji, Keichū spent his last years at Enju’an in Kōzu in the Province of Settsu.

His prolific works set a new standard in the study of the classics, though building on recent revivals of interest in the subject. When the daimyo of Mito, Tokugawa Mitsukuni, decided to sponsor an edition of the Man'yōshū, he commissioned Shimonokōbe Chōryū, heir to the learning of the great poet and Man’yō expert Kinoshita Chōshōshi (木下長嘯子:1569 – 1649), to undertake the project. However his dilatory approach, combined with illness, and finally death, impeded his work and the task fell to Keichū, a close friend.
The result was the latter’s Man’yō Daishōki (万葉集大匠記:1687-1690), which had a profound effect on kokugaku scholarship. 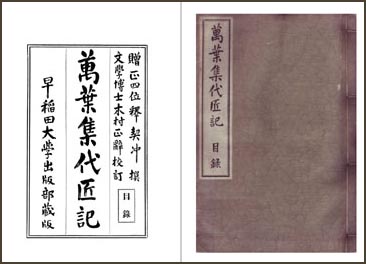 Similarly his Waji Seiranshō   和字正濫鈔 (1693: A Treatise on the Proper way to Write Japanese Words) challenged the standard orthographical conventions set by Fujiwara Teika and reconstructed distinctions in the old Japanese lexicon based on the earliest texts. In addition to these Keichū wrote the
Kōganshō  厚顔抄 1691 A Brazen-faced Treatise, the Kokin Yozaishō, the Seigodan, the Genchū Shūi, and the Hyakunin Isshu Kaikanshō.
- source : wikipedia

- quote -
Keichū
a commentary to the Nara-period poetry collection Man’yōshū (Collection of Ten Thousand Leaves, mid-8th c.).
Keichū’s aim in writing this work was to reconstruct as closely as possible the original meaning of the text by looking at a wide range of contemporary and near-contemporary sources. Within the work, Keichū discusses the basic principles of his approach to the study of the past, which can be summarized as follows:

Reconstruct the contemporary meaning of the work and avoid at all costs any interference from the modern reader’s expectations and beliefs.
Make use only of sources from the same time period or thereabouts.
Do not take for granted the theories contained in later commentaries, including traditionally authoritative ones, because they may not be accurate or not apply directly to the age of the Man’yōshū.

Keichū applied these principles not only to the Man’yōshū, but also to the Kokinshū and other important works of the past. Through his method he made a number of important breakthroughs that forever changed the face of scholarship on the classics.

Although Keichū’s method may seem obvious today, no one before him had used such a rigorous philological approach in waka studies. Traditionally, waka scholars studied under a master and the emphasis was on amassing the transmitted teachings of one’s school or “house” (ie) rather than on textual study. Keichū never studied under a specific master, and so was never bound by a master-disciple type of relationship. Even more important was the boom of book publishing, which enabled Keichū to obtain the texts he needed for his research with ease.

As sources for his commentary to the Man’yōshū, Keichū names the Nihon shoki (Chronicles of Japan, 720), the Kaifūsō (Collection of Fond Recollections, 751), the Shoku Nihongi (Later Chronicles of Japan, 797), the Kogo shūi (Gleanings of Ancient Words, 807), the Shinsen Man’yōshū (Newly Edited Man’yōshū, 894), and the Wamyō ruijūshō (Japanese Words by Category, ca. 938), all of which were written between the 8th and 10th centuries, and all of which were available in print when Keichū wrote Man’yō daishōki in 1683.
None of them had ever been printed prior to the late 17th century, so it can be said that Keichū’s text-based scholarship would have been impossible in earlier periods. That Keichū’s approach relied heavily on printed editions of the texts he studied can be seen from the many notes and comments that he personally wrote on his own printed editions of the classics. Keio University Library owns one such book (Fig.2).
- source : futurelearn.com/courses - Keio university - 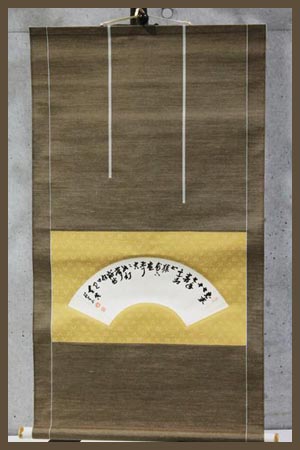